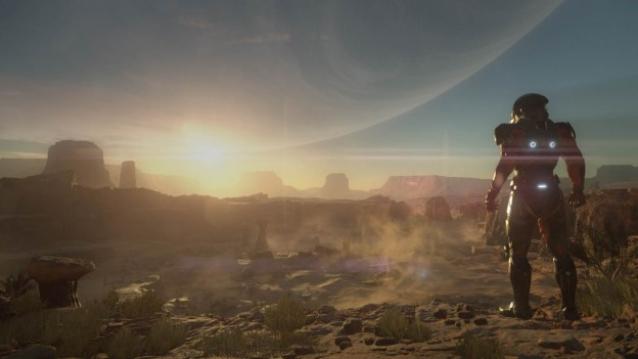 We’ve known for a while that the much beloved Mass Effect franchise is getting a sequel called Andromeda, but it was only at E3 that we got a peek at it.


The game, titled Mass Effect: Andromeda, will be set in, surprise, the Andromeda galaxy. You will leave the comforts of our Milky Way galaxy and make your way over to Andromeda. Once there, you must embark on an epic quest to find a new home for humanity.

The reason you’re leaving your homeworld is not known, nor your reason for journeying to Andromeda. BioWare is playing its cards very close to its chest on that front. What they are talking about is the fact that the game will be “larger” and “more open” than any Mass Efffect game before it.
While the original Mass Effect series was set in your home galaxy and there were a tonne of alien races to deal with, at least you were recognizable alien. In Andromeda, Bioware says, you’ll be a true alien. Nobody will know who or what you are and you’ll have the opportunity to forge an entirely new alliance on new terms.

BioWare promises an “unprecedented level of freedom” mixed in with the linear, cinematic missions that gamers have come to love. This will also be the first Mass Effect game to take advantage of EA’s powerful Frostbite engine, the same engine that powers Battlefield and Star Wars: Battlefront.
The game will ship in early 2017. Expect more news as time progresses.

@techfoogle
Previous US makes progress during cyber talks with China
Next Microsoft acquires LinkedIn for $26.2 billion, here are 10 things you can buy with Rs 1,758,542,690,000