Galaxy 6 and Galaxy S Edge will be the names of Samsung’s MWC launches, says leak 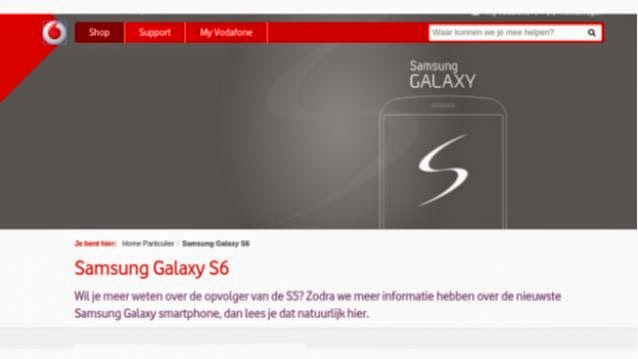 The Mobile World Congress (MWC) is still a month away, but looks like Vodafone Netherlands may have accidentally or intentionally leaked the names of the phones Samsung is planning to release at the MWC in Barcelona. According to a report in Slash Gear, the new phones to be launched will be called Samsung Galaxy S6 (this name was pretty much known) and a curved display variant called the Samsung Galaxy S Edge.

Looks like Vodafone Netherlands ended up putting a placeholder page for the Galaxy S6. While this name was known by most of us, the folks at AndroidWorld actually dug up the page’s source code to find another listing with the name – Galaxy S Edge. We had come across reports that a Samsung phone with curved edges was imported in India to be tested. Maybe the Samsung Galaxy S Edge is that phone.

The naming convention seems logical considering Samsung’s first curved edge phone was called the Samsung Galaxy Note Edge, instead of the Note 4 Edge – even though the specs of the Note Edge and Note 4 are similar.

Samsung has been working on the Galaxy S6 under the name, ‘Project Zero‘. Project Zero seems like a very different approach of nomenclature. It also hints at Samsung trying to build something different and unique, that could possibly help its failing Galaxy lineup bounce back.

An initial specs list for S6 reveals that the phone may have a 5.3 inch display and will have a 4K display which translates into 3840×2160 pixels with over 375 ppi density on an AMOLED screen. To power the phone, we may have a Qualcomm Snapdrgon 810 and 4GB RAM.

Recently there were reports of Samsung deciding to go with its own Exynos processors for its flagship phones after some of the samples with Qualcomm Snapdragon 810 chipset were seen to be overheating. But Qualcomm has now assured that it will provide Samsung with an updated version of Snapdragon 810 chip for their much anticipated Galaxy S6.