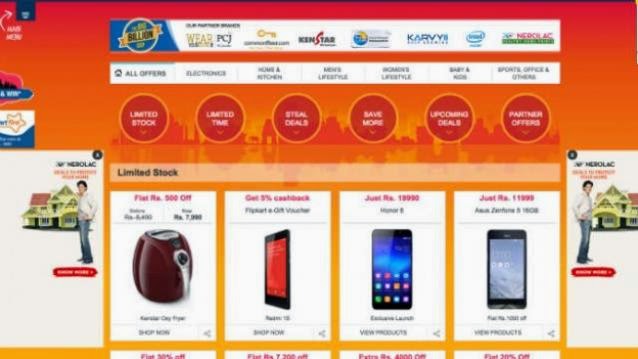 The Big Billion Day sale by Flipkart turned out to be a damp squib as only a small percentage of online buyers could manage to get their hands on the massive deals. So much so, that Flipkart founders issued an apology to the disgruntled customers. While the apology itself was not of much help, if reports are to believed, that should be the least of Flipkart’s worries at the moment. According to a Times of India report, top electronics firms such as Samsung, LG and Sony are not happy with Flipkart for selling off their products at heavy discounts – much below the cost price of said products.

Some of these companies have also suspended fresh sales to Flipkart and may even consider taking legal action as they term Flipkart’s sale pricing as ‘predatory pricing’. According to a senior executive from a company which deals in white goods, their products sold on Flipkart are via unauthorised dealers which makes it difficult for companies to offer warranties on them. According to another company executive, the heavy discounts affects the business of brick and mortar retailers. Many companies will not offer fresh supplies to Flipkart unless they get an undertaking from Flipkart that pricing will not be at unrealistic levels.

LG Electronics India,VP (sales) Sanjeev Aggarwal told the news site that his company steers clear of online retailers and partners selling LG products on Flipkart are not authorised trade partners. For instance, LG 32-inch LED backlit LCD TVs start from Rs 27,000 according to LG’s official website, but Flipkart was offering one 32-inch LG LED TV for as low as Rs 14,900.

Sony India head of sales took a more lenient approach and mentioned that Sony will hold discussions with online retailers to ensure that pricing remains realistic.

Some of the companies apart from the three mentioned above are also considering taking legal action, as they claim that such sales damage their brand value and they want to know the modus operandi behind how products are sold below cost price.

With the festive season just having started, big brands staying away from Flipkart as well as other online retailers will surely hit their sales under the Eletronics section. Consumers should also be extremely careful about things such as warranties. You do not want to end up with a product which does not come with company warranty. As mentioned in the report, since some brands do not have authorised sellers on some ecommerce sites, it is as good as buying stuff off the grey market. Taking into consideration the exponential growth in e-commerce sites, brands should hopefully arrive at a mutual agreement.