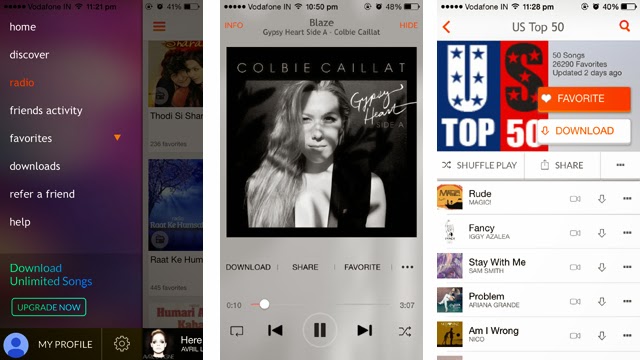 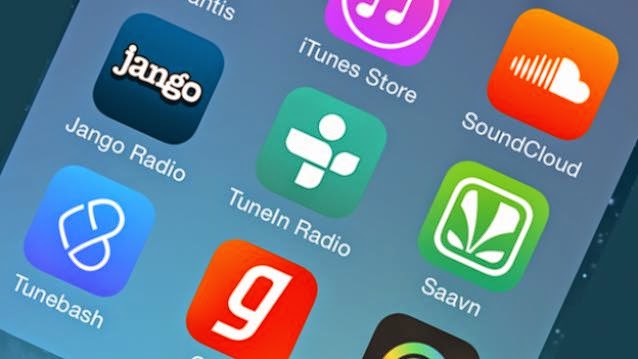 If you’re out to discover some new music without pinching your pocket, online music streaming services are great places to start. You get to choose from a huge collection of songs along with lots of other benefits. For starters, you get to listen to music without having to first download or purchase songs, while also saving some storage space on your device.

Unfortunately, some of the most popular music streaming services such as Spotify, Slacker Radio, Deezer, Google Play Music and iTunes Radio aren’t available in India. But believe it or not, there are plenty of options out there that make great alternatives to these popular music streaming services and allow you to stream music for no cost at all. Some apps let you download music and listen to them offline, too.

After sifting through apps with limited features, sloppy interfaces and sparse music choices, here are some of the best music streaming apps that made the cut.

Gaana is a great place for listening to Hindi and English music with a simple interface. You can download songs to play them later, though you’ll need to upgrade to the paid version Gaana+ for unlimited downloads. One of the best things of the app is that it offers the same features across Android and iOS. Some songs will let you watch the video or read their lyrics. You can easily add songs to the playlists you create, though creating new playlists is not very straightforward. By default, songs are streamed at 128kbps. You can set the app to stream at higher quality of 320kbps, but that would consume more mobile data and is suitable for faster internet connections.

Gaana’s built-in radio is just as comprehensive as the streaming features. You can choose a radio station based on a song or artist you like, or make use of its ‘One touch radio’ feature that plays music based on your listening habits. There are few pre-created radio stations as well, though these cater mostly to Hindi music. 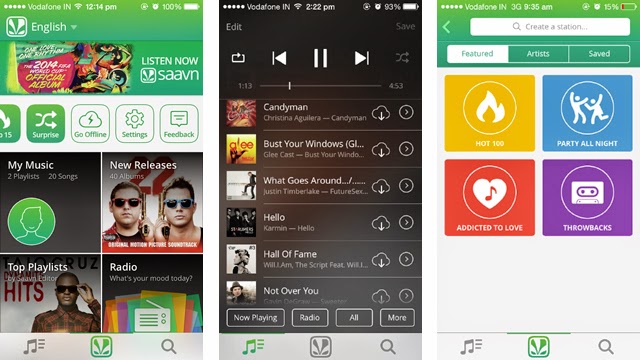 Saavn includes plenty of features, though its iOS app is more polished than the Android one. Other than Hindi and English, you can listen to songs in Tamil, Punjabi, Marathi, Gujarati and other Indian regional languages. Similar to Gaana, Saavn lets you download songs and play them offline. But the service is free only for the first 14 days, after which you’ll need to upgrade to the paid Saavn Pro app for unlimited downloads. If you install the app on more than one device, the app will automatically sync downloads across each of them – something that the Gaana app lacks. There’s a ‘Surprise’ feature that creates a playlist of 50 songs based on your music preferences.

Like Gaana, Saavn lets you browse through radio stations based on the artist or song you search for. However, the radio service is not consistent across Android and iOS. The Android version has a more comprehensive list of artists and songs than the iOS app. 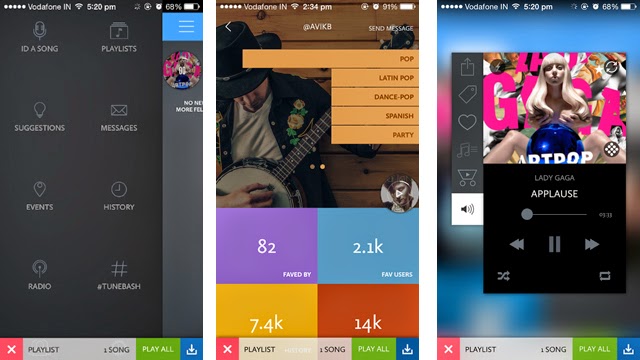 Tunebash is a relatively new music streaming app that has lots of unique features to boast of. You can listen to all kinds of music whether Indian or international, anywhere in the world. It lets you choose songs based on the song name, artist, album or hashtag. For example, searching for the hashtag ‘cool’ pulls out songs that are trending as ‘cool’. The sporty interface is incredibly easy to use. Besides playing music, Tunebash is also a music social network. You can share songs, make friends and see what others are listening to. It makes use of your location information to find what are the popular songs in your location and who are the popular listeners around you. You earn karma points as you use the app, which adds to your popularity.

Radio isn’t one of Tunebash’s strongest features. It has a limited collection of ‘stations’, which are basically individual songs from the same artist. The songs are mostly from unknown artists. 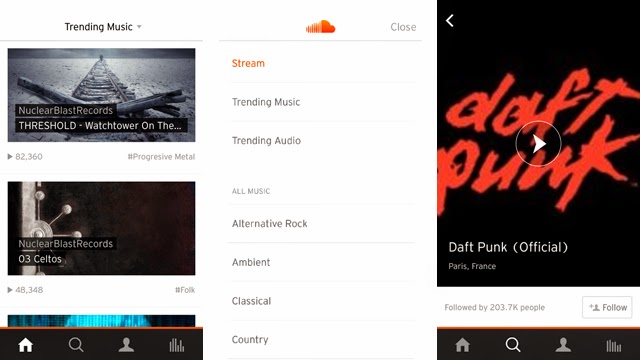 SoundCloud might not have the largest collection of music, but it’s the go-to place for finding the latest songs by many artists. You can follow your favourite artists to find out what’s launched or search for new aspiring artists. Many of the songs are uploaded by individuals, so you might not always get the original song or the best audio quality. You can repost tracks you like and like/favourite any good tracks you discover. The SoundCloud app for iOS lets you download songs with AudioCopy  for offline use. SoundCloud does not have any radio feature. 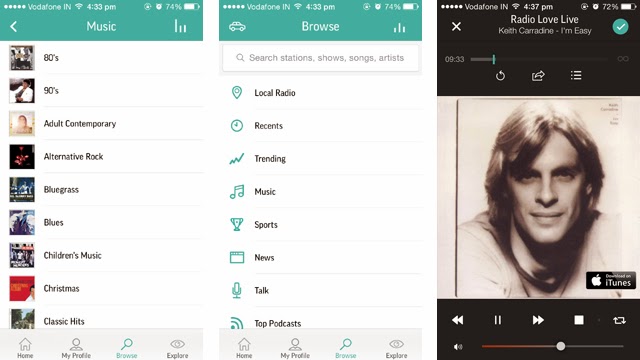 Online radio services such as TuneIn Radio are a great option if your phone lacks a built-in radio or you need more than what your local radio can provide. TuneIn Radio brings radio stations across the globe to one place, so you can listen to music as well as news and live radio broadcasts around the world. For music, you’ll have to pick a radio station from a genre. There are over fifty genres to choose from including soundtracks, jazz, hip-hop, folk and country, and TuneIn Radio brings together all the radio stations playing songs of that genre. This opens you to a vast collection of music without limiting you to a particular country or language.