First impressions: Jolla Sailfish OS smartphone comes to India at Rs 16,499; we check out the device and the OS 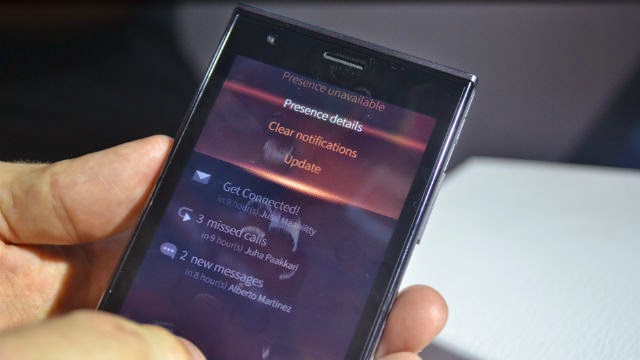 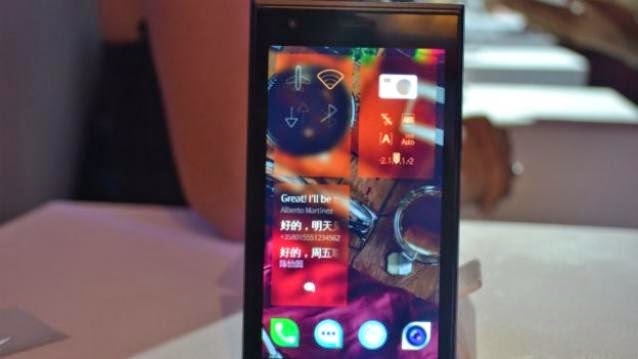 Jolla Sailfish smartphone during the launch.TechTrainIndia

Finnish smartphone company Jolla has finally launched its Jolla Sailfish OS smartphone in India and the device is available only on Snapdeal for a price of Rs 16,499. The phone is available in Poppy Red, Keira Black and Aloe colours.

As far as specifications are concerned, the Jolla Sailfish OS has a 4.5-inch qHD screen with IPS panel and Gorilla Glass 2, it’s got a Qualcomm Snapdragon 400 system-on-chip with a 1.4GHz dual-core processor, an 8 megapixel rear camera and 2 megapixel front camera. 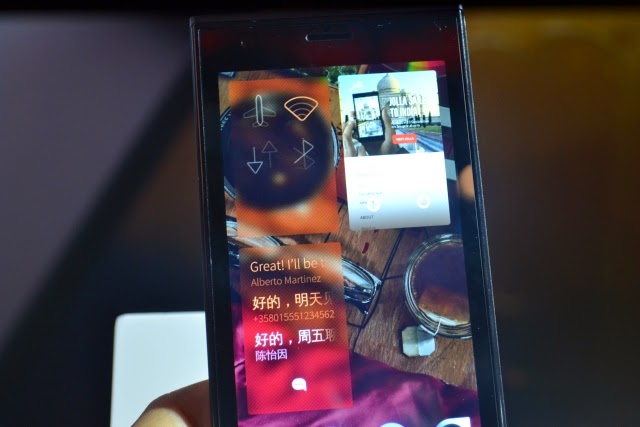 The RAM is 1GB and total storage space is 16 GB along with a microSD slot, although the limit on that is not clear. In terms of connectivity it’s got WiFi, 3G, Bluetooth 4.0, USB and has a 2100mAh battery with 9/10hours of talktime on GSM/3G respectively. Sensors on the smartphone are: Proximity, Accelerometer, Gyro and E-compass.

It runs on the Sailfish OS, but the device is compatible with Android apps. While there isn’t a dedicated Play Store, you can side-load Android apps onto your Jolla phone. We got to spend some time with the device during the launch and here are our first impressions. 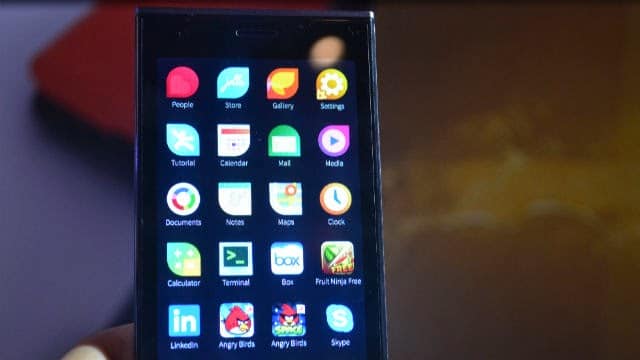 You can download and install Android apps on the Jolla smartphone as well. TechTrainIndia

Design, Screen: Jolla’s motto might be be ‘We are unlike’ but the truth is that when you look at the Jolla Device you can’t help but think, “Oh! it looks like a Lumia”. But the rectangular design has a lot more to it than just reminding you of a Lumia device. For starters, you can completely remove the back cover of the smartphone and Jolla is also offering a developer kit called The Other Half Developer Kit which will allow users to modify the device at a hardware level as well. You can download this kit from the Jolla website.

The kit will basically allow you to work your way through the hardware of the phone. You can even modify the camera, add a solar screen in the back, print your own cover in 3D, etc. And while it does sound like an exciting feature, the fact is that this is something that will most likely appeal to the enthusiasts and the geek community. A lot of regular smartphone buyers will probably not be bothered with this decision, when choosing to buy a Jolla smartphone. 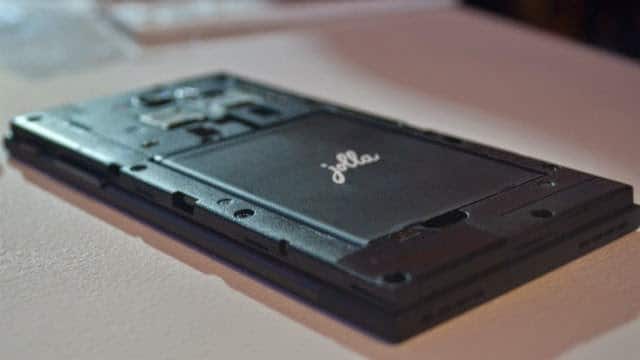 You can remove the cover and under the Other Half program even modify the Jolla smartphone.

As far as screen goes, the resolution is a little disappointing and yes the fingerprint smudges are very noticeable all over the device. But again, this isn’t a smartphone that is aiming to give you the top of the chart specs, rather it’s offering something different. And that is the OS.

The Sailfish OS: This is truly what makes the Jolla phone what it is, different from the Android army that is currently dominating the smartphone market. For starters, the OS is entirely gesture based. When you’re using an app, you can just swipe from left to right to get back to the Home Screen. To close an app you have to just swipe from top to bottom.

Also when you unlock the smartphone, you’ll notice that you can access all the apps in one go, just keep swiping down. Sort of like how in iOS you keep going left or right to access apps.

Where the messages app is concerned, you can link your Facebook, Google Hangouts, SMS all in that one app and then choose the method you’re using accordingly. It did look a little confusing, given that you can keep three messaging options combined into one. 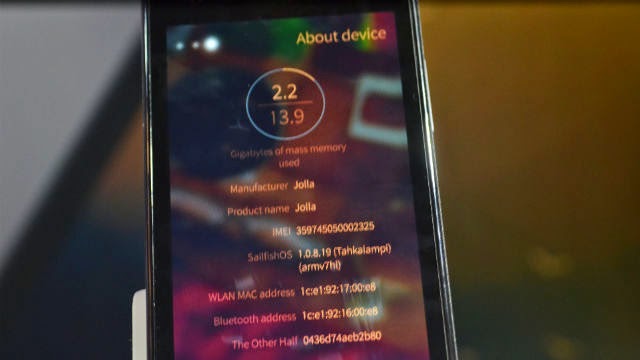 Details of the Jolla smartphone. TechTrainIndia

You can also go to settings and create shortcuts to keep certain apps on the homescreen. There’s also a Pulley Menu on top of your homescreen, (which you can just pull down by swiping from top to bottom) and certain options like making a call, using the camera that you’ve chosen will be visible on this menu.
If you’re an Android or even iOS user, all of this can seem pretty confusing. There’s the whole swiping correctly bit, followed by the fact that too much seems to be happening on HomeScreen all at once, if you end up swiping in too many directions. So be prepared for a learning curve as this a completely new OS. You will eventually get the hang of it in some time, but a lot of it is hit-and-miss in the beginning and it can be infuriating.

Sailfish OS also has something called Live Multitasking, which basically shows all the apps that are running on your phone at one go on the homescreen in a grid like format and you can just close apps or switch between these apps from here. A great feature, except that if you’re running too many apps, it will be one crowded homescreen. 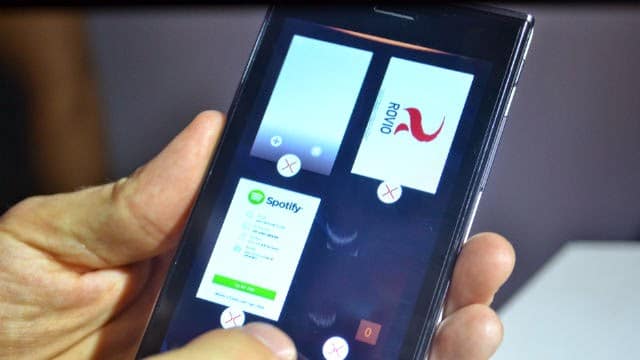 You can see all the apps that are running on one page and choose to close them in one go. TechTrainIndia

From the devices, we tried at times we did notice that running too many apps was problem and some took time to load. Even clearing notifications took quite a time on the smartphone. We’re not sure if this was because of poor connectivity or the device being slow. While the OS is different to look at, the confusion is something that would not appeal to the impatient user.

Getting Apps, Privacy: So this was another concern that we wanted to look at.  Sailfish is compatible with Android, meaning you can run Android apps on it. The phones we saw in the demo zone had quite a few Android apps running on them. And not all of them ran smoothly. For instance our attempts to run Fruit Ninja on one device saw the app crash repeatedly.

Notification on the Jolla Sailfish smartphone. The screen does attract smudges. TechTrainIndia

So how did they get there? Well for starters you can sideload apps. If that’s too much for you, Jolla lets you choose from a variety of app stores such as Yandex, Aptoide, Amazon App Store. Also as a Jolla executive showed us, (incidentally he reminded us that in Europe while the Google Play Store is on top, the Amazon App Store is number two) you can go to any of these app stores, choose an app and it will download and install on your Jolla Smartphone. According to him, when you set-up the phone you can choose the market place you want and interestingly you can have more than one app store market.

Android and Apple only allow users to download devices from their official stores. To do otherwise you need to jailbreak the devices. The folks are Jolla clearly believe in giving users lots of options when it comes to App Stores.

As we saw, getting apps like Instagram, Facebook, etc., is not going to be a problem. We were unable to see how smoothly they ran since the Internet connectivity at the event was truly terrible. Hopefully we’ll know more once we get the review units.

The only question is that in a market like India where most users are unaware of what constitutes as mobile spam or how to safeguard their privacy on the mobile, relying on too many App Stores could be a security problem. But from a choice perspective, this is actually great.

Camera: The Jolla Sailfish OS smartphone has an 8 megapixel camera and 2 megapixel front camera. As we saw the camera has a lot of modes, from ISO settings to White Balance, to Delay to continuous shot etc. It also took us sometime to figure out that switching to the front camera requires clicking on the list Main Camera option in the bottom right corner, which is obviously going to make taking selfies a difficult task. 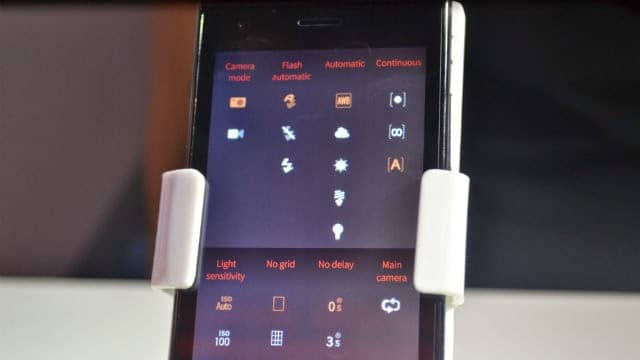 The camera settings on the Jolla smartphone. TechTrainIndia

We’ll have more details on the camera once we do the review, but for now it’s suffice to say that the number of options do make it look like an interesting one. Also the fact that who choose to play around with the hardware can upgrade the camera, makes this seem like an offer than some enthusiasts would be keen to take up on.

Conclusion: Overall we’d have to say that Jolla indeed does stand out from the crowd. Yes, there’s a lot of swiping involved (BB 10 had that too) and you can run Android apps as well but some of it might just be confusing for users. The truly exceptional feature is that Jolla allows users to modify and play around with the hardware. We are eagerly awaiting the review unit to put the Jolla Sailfish OS and the device through its paces.