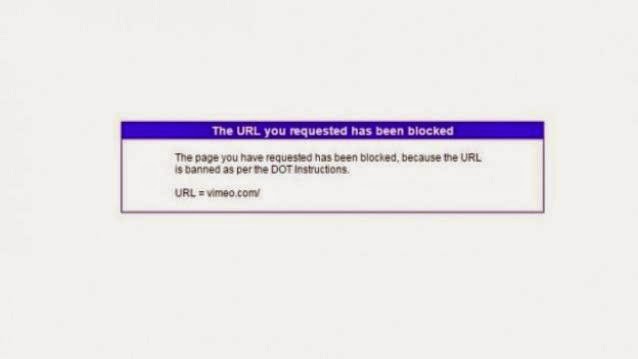 In yet another case of mass blocking of websites, the Department of Telecommunications (DoT) has issued an order to block as many as 32 websites including popular sites such as SourceForge, DailyMotion, GitHub, Pastebin and so on. The DoT has issued the order under section 69A of the Information Technology(IT) act, 2000 and the IT act Rules, 2009.

The Section 69A of the IT Act, 2000 states “Power to issue directions for blocking for public access of any information through any computer resource”. Based on the DoT directive internet service providers have blocked access to 32 websites.

According to Arvind Gupta, the national head of BJP’s IT cell, the said websites have been blocked due to security reasons. He tweeted out the reasoning behind DoT’s decision to block the said sites.

The websites that have been blocked were based on an advisory by Anti Terrorism Squad, and were carrying Anti India content from ISIS. 1/2
— Arvind Gupta (@buzzindelhi) December 31, 2014

The sites that have removed objectionable content and/or cooperated with the on going investigations, are being unblocked. 2/2
— Arvind Gupta (@buzzindelhi) December 31, 2014

While security concern is a valid point, the idea of blocking particular objectionable URL’s (that is again, debatable as ‘objectionable’ is quite a vague term) rather than entire websites seems a bit odd. And we have, in the past, seen websites as well as torrent sites being blocked based on John Doe orders.

In the current batch of blocked websites we have Vimeo and DailyMotion- which are YouTube like video sharing websites; GitHub is a forum where software developers host and share programming code and so on.

According to Gupta, Vimeo.com has been unblocked some hours ago and should be accessible. He said that websites which will comply with the Anti Terrorism Squad directives will be unblocked.