Microsoft’s Cortana vs Apple’s Siri: Which voice assistant is better? 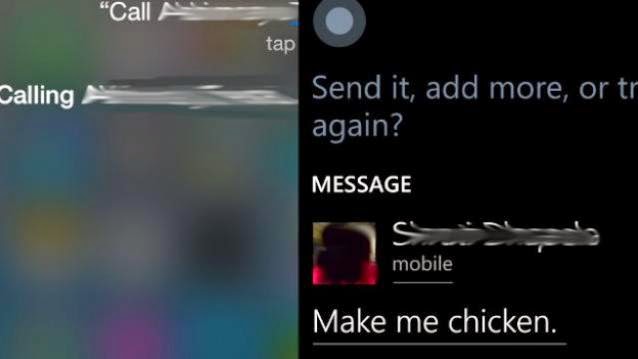 Like Siri Cortana too allows you to make calls, send messages etc

As smartphones become more and more ubiquitous, and dare we say a tad boring, the makers behind these devices are also shifting focus to something else, something that will help your device be more than just a smartphone. From Apple to Microsoft to Google, everyone is dreaming of a connected eco-system, where you can link your car to your smartwatch to even your home to your smartphone. Perhaps this is also why ‘voice-assistants’ on these devices are set to gain a more prominent position. And this also explains, why in 2014, Microsoft finally followed the footsteps of Apple and Google and launched its own voice assistant for the Windows Phone devices: Cortana.

Currently, Cortana is still in beta mode and available only in the US. We managed to get Cortana on one of our Lumia devices here in India, and were left very surprised by how impressive this new product from Microsoft is. In this post, we’ve compared it to Apple’s Siri. Personally speaking as a heavy duty iPhone or iPad user, I’ve never really seen the point of using Siri on a daily basis. But for someone else who is managing a number of tasks at point, like driving and trying to open a map on the smartphone or text message someone, a voice assistant such as Siri or even Cortana can be a godsend. Here’s our take on the two.

Tasks
Cortana is brand new and it shows. Microsoft has made sure that their personal digital assistant comes across as one of the best available. For starters, there is the option of location search (which doesn’t work in India yet since it is not officially available) to help users find restaurants. Users can set reminders and have Cortana alert them ahead of a meeting or to just get out of bed and go to work. It can also let users know when they get a message and will offer, quite nicely, to read messages.  More importantly there’s a music symbol on top, which allows Cortana to recognise music that is playing. Siri will be catching up to this with iOS 8 which brings Shazam integration, but hey Cortana already has it.

The Microsoft Assistant will give you the artist information and also download the song if you want to do so from the Nokia Music Store. As with Siri, Cortana can also send messages and make calls to users on your phone list, which is pretty efficient. While Cortana has the edge in recognising the music, you still can’t post Facebook status updates or tweet using Cortana, which you can do via Siri. And no, you can’t search for places nearby in Siri in India. 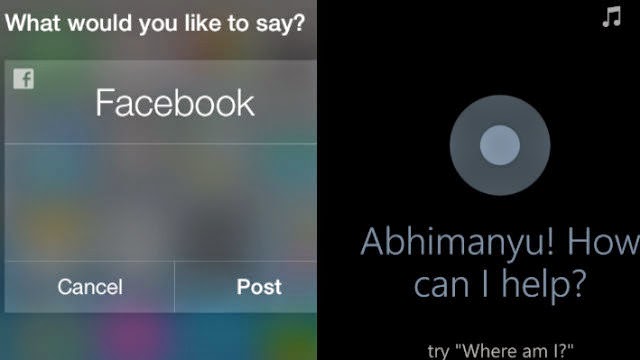 Siri has a Twitter/Facebook advantage over Cortana.

However, Cortana does have a bit more zing than Siri at the moment. Cortana’s Notebook — as Microsoft insists on calling it– will ensure that when you open Cortana it will keep a track of your interests from your favourite searches to reminders to people you contact, etc. And you can pick the name that Cortana will call you by.

This is not to say that Siri isn’t efficient. She is and will let you do a lot on your iPhone without having to open each app (Siri will also open apps directly if you want). The Twitter, Facebook sharing feature is a big plus for Siri. While Siri is high on efficiency in tasks, Cortana’s spark is what makes the Windows Phone assistant a worthy competitor.

Ability to recognise accents
For a lot of Indians, this is what makes a big difference, a voice-assistant that will recognise an Indian accent. With Siri, recognise a lot of voice commands can be an issue and at times, it can all be rather confusing.

While I’m able to get Siri to make phone calls for a very Indian sounding name, it’s much harder for Siri to get simple sentences like “I’m bored.” The options that Siri gives can often be quite funny and depending on your need, plain frustrating.

Like Siri, Cortana too suffers from its fair share of hiccups when it comes to understanding the Indian accents. Again while something like ‘Chicken Biryani’ gets picked up easily (by Siri too), words like ice-cream or even my own name can at times be quite a challenge. 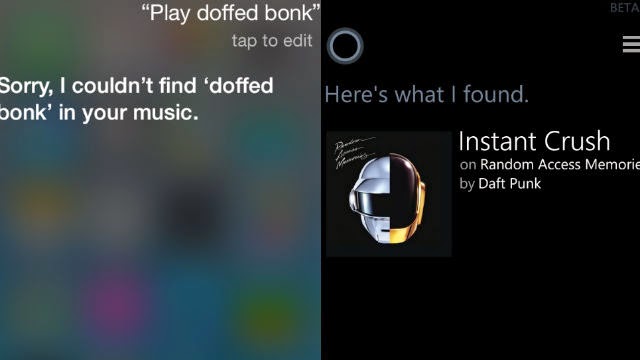 Siri can be rather Daft at times.

Overall both assistants can be a pain if your accent doesn’t sound like the typical Indian one in an American sitcom. And while Siri has the edge with the number of tasks, explaining simple sentences to Cortana, which used both regular English and Hindi words, is easier.

User Interface
To get to Siri, you simply have to long press the Home button on the iPhone and that’s it. It’s still a pretty boring bare-bones interface. Sure with iOS 7, you can see the translucent effect and glimpse your actual home screen under Siri. But the grey voice-assistant is still rather dull to look at. When you do a search, it does brighten it up a little bit with Wikipedia Search results, but that’s about it. Even the Facebook and Twitter update boxes are rather dull and minimalistic. It’s a grey box at the end of it and that is never very exhilarating. Personally, I’d rather get Siri to open the app, instead of posting from Siri itself. Just for that dash of colour. 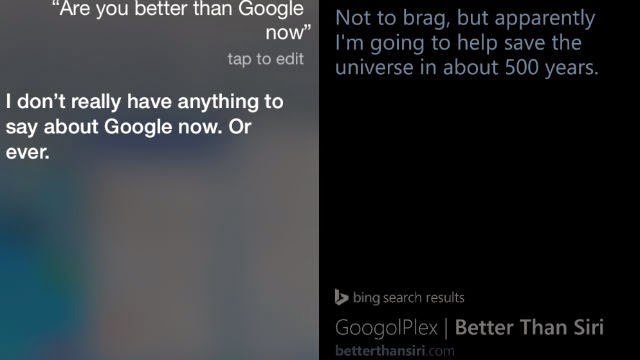 Both Siri and Cortana display some cheek when you ask about competitors.

In comparison, for Cortana, Microsoft has tried to borrow a bit from Google Now. While this doesn’t mean they have a cards-focussed design like Google Now (news stories, navigation, reminders, etc) Cortana at least ensures that you can scroll down to a little bit more than just talk to your phone. It should be noted that UI in Cortana is also a little confusing. Ideally you’d think of clicking at the Cortana symbol on top, but do to a voice search you have to click on the little mic in the bottom.  You wonder, then why keep the Cortana symbol on top.

In conclusion, given that neither voice-assistant can do location-based searches in India, it is a bummer. Since it’s one of the things a lot of users would like to do, while say they are driving: just talk into the phone and let it find a restaurant. Hopefully both Apple and Microsoft will expand these services beyond the US.

But seeing how Cortana comes to Siri in terms of actions and task, it’s fair to say that Microsoft’s phone assistant isn’t another new kid on the block.