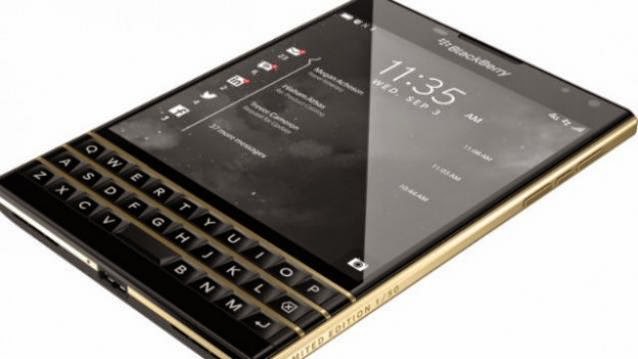 BlackBerry might no longer be the leader in smartphones, but hey that doesn’t mean they can’t launch over-priced smartphones. Recently BlackBerry announced that they will launch a limited Black and Gold edition of the Passport, which will cost $999 in Canada and $899 in the US.

Another company called Goldgenie is also offering luxury customization of the Passport and that will cost a tidy sum of £1,247.50, or $2,020.

As far as the ‘official’ gold Passport is concerned, BlackBerry says only 50 will be available worldwide. According to the company’s official blog, “Each one comes engraved with “Limited Edition” and the production number, as well as a Valextra cover made from soft calf leather with Valextra “costa” lacquered piping.”

What is not clear is how and why that little bit of gold on the side is pushing up the cost of the Passport to a $900. The regular BlackBerry Passport costs $599 in the US as the company slashed the price from the original $699. In India, the phone costs Rs 49,990.

The BlackBerry Passport sports a 1440 x 1440 pixel resolution spread across a 4.5-inch screen giving a pixel density of 453 dots per inch, covered by Gorilla Glass 3.

Beneath the touch sensitive display, you have a dedicated QWERTY keyboard that also doubles up as a touch-sensitive swipe pad. The Passport is powered by a Qualcomm Snapdragon 800 SoC which will come with a quad-core processor clocked at 2.2GHz along with 3GB of RAM and 32GB of expandable memory.

With the square display, BlackBerry is targetting working professionals as opposed to the regular consumers whose phones have a rectangular shape. But it seems even professionals don’t mind a little bit of gold on their ‘official device’ and BlackBerry is hoping to woo them with this gold edition. Read our review of the BlackBerry Passport here.