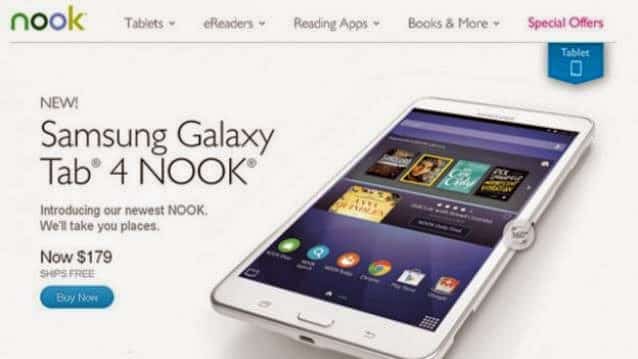 Samsung and Barnes & Noble have launched the all new Galaxy Tab 4 Nook, a 7-inch Android tablet optimised for reading.

The tablet is now available in more than 660 Barnes & Noble bookstores and also online at Barnes Barnes & Noble and Nook for $179 (approximately Rs 10,850) after a $20 instant rebate, and includes more than $200 in free content from the Nook store that includes bestselling books, popular TV shows, top magazines and more.

At 276 grams and 8.89mm, the company claims that this tablet is lighter and thinner than any previous color Nook device. The 7-inch LCD display features 1280 x 800 pixels of resolution. With this tablet, Samsung and Nook are trying to blend the best of both worlds – a powerful tablet and an e-reader. The tablet comes equipped with a 1.3-megapixel front camera and a 3-megapixel rear shooter, something we haven’t seen in the previous Nook devices.

The device also comes with support for Wi-Fi and gets the full suite of Google applications featuring Chrome Web Browser. It also gets built-in GPS capabilities for location-based apps. Samsung has also added its Multi Window innovation, allowing customers to use more than one app simultaneously and share content between apps at the same time, like reading an email and finding a location on Google Maps.

The device will allow users create six personalised profiles and also supports parental controls. The 8GB built-in storage can be expanded further up to 32GB via microSD card slot. One will also find dual speakers with a built-in jack.

“The Samsung Galaxy Tab 4 NOOK is the most advanced NOOK ever, delivering the great NOOK experience our customers have come to love, with the high-performance tablet features they’ve asked for,” said Michael P. Huseby, Chief Executive Officer of Barnes & Noble, Inc. “We invite reading and entertainment fans to visit their local Barnes & Noble store to experience the new Samsung Galaxy Tab 4 NOOK. Once they do, we’re certain they will make this innovative device part of their daily routine.”

Barnes & Noble has spent years investing heavily in its Nook e-book reader and e-book library, but have been struggling to be profitable. In December, the chain said it was evaluating the future of its tablets, but still offered a new non-tablet e-book reader during the holiday season. Now, with yet another attempt to turn itself around as competition from discount stores and online retailers like Amazon toughens, it has planned this shift along with Samsung.

Let’s wait and watch if this partnership strikes the right chords for the company.