Asus Zenfone 4 review: One of the best budget smartphones you can buy 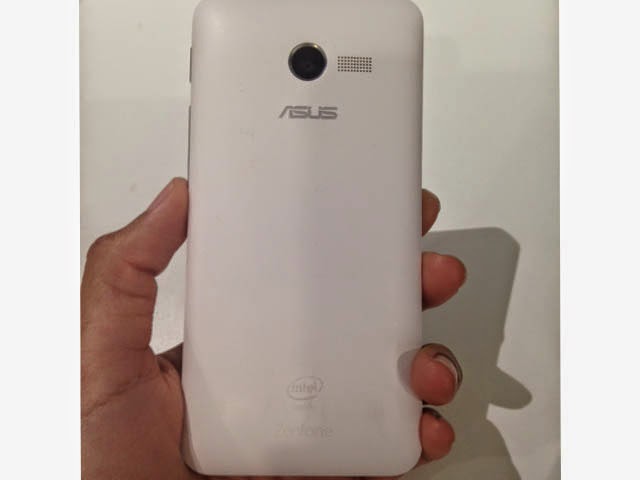 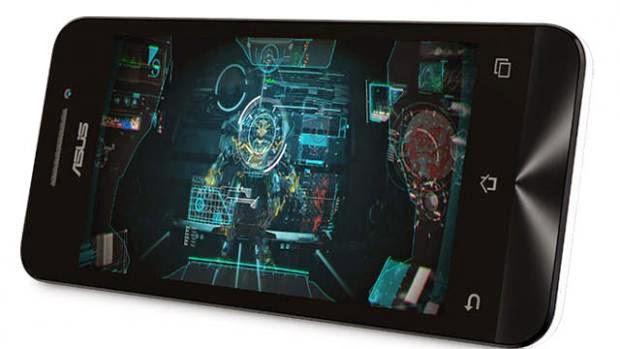 The Asus Zenfone 4 is the smallest and the cheapest smartphone in the Zenfone family, sporting a 4-inch display. The middle sibling in the family – the Zenfone 5 is one of the best mid-range smartphones we’ve tested, giving the Moto G (first gen) a run for its money. Does the Zenfone 4 put up the same show in the budget category? Read our detailed review to find out.

The Asus Zenfone 4 has a 4-inch display wrapped in a rectangular curved-edged body. This makes it easy to use one handed and the ergonomically-placed buttons are easy to reach. The removable plastic back cover has a chalky matte finish, while the volume and power buttons are metallic with concentric circles. As with all the phones in the Zenfone range, there’s a shiny strip at the bottom of the phone, which in this case is made of plastic. The phone weighs 115g and feels solid. Despite the budget price, the phone looks pretty stylish and sturdy in construction.

The Zenfone 4 has a speaker grille next to the camera

The more unconventional design features include the stereo speakers that sit right next to the back camera, while the micro USB slot is at the top-left edge of the phone. The position of the speakers can sometimes obstruct the sound when watching videos or playing music. The 3.5mm headphone jack is placed on the top.

The 4-inch display is very reflective

Features
As with all the phones in the Zenfone range, the Zenfone 4 has the Zen UI skin attached to the Android 4.3 Jelly Bean operating system. But unlike many other Android skins we’ve seen, Zen UI is very clean and adds useful touches without messing with the Android experience too much. 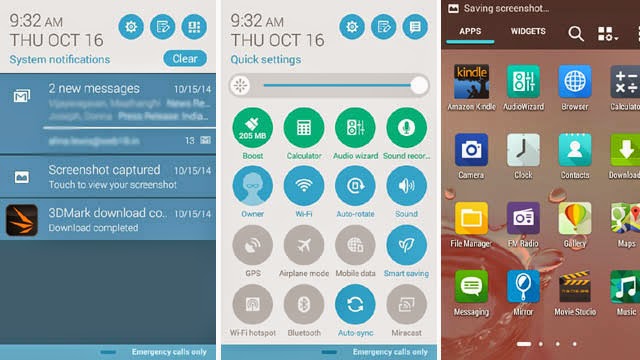 If you are already an Android user, you’ll be familiar with most of the phone’s features. There’s the usual app drawer for apps and widgets, long pressing the homescreen pulls out settings for changing the homescreen, and homescreen widgets and shortcuts can be removed by long-pressing and then dragging them to the Remove button.

It includes lock-screen shortcuts for quickly accessing important functions such as the camera, phone and messages. All you need to do is swipe the locked-screen icon across the screen and the phone immediately unlocks the screen and puts you through the selected app. 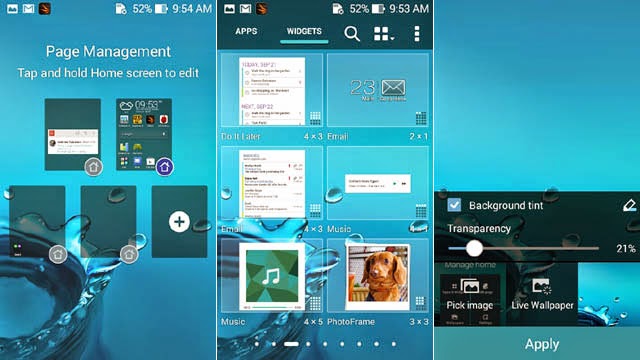 Now, there’s a slight twist in the notification dropdown – the Zen UI divides the dropdown into two. Swipe down from the left side of the screen, and you see notifications from different apps and swiping the right side will display Quick Settings for quickly accessing common apps and settings. This might not be very obvious at first and you may wonder why the notification screen looks different every time.

For a budget phone, the Zenfone 4 packs plenty of features that you might find useful even if you are a moderate user. Asus WebStorage is Asus’ own cloud service which lets you save online backups, sync files between devices and share them with your friends. But when we tried to use it, the app refused to open despite the phone being up-to-date.

There are several other apps that come pre-installed. Some apps such as Omlet Chat, Party Link and Amazon Kindle overlap with some of Google’s own apps that serve the same purposes. For example, there’s Omlet Chat, Hangouts and the standard text messaging app for sending messages. These additional apps are not only unnecessary, but also consume precious storage space as they cannot be deleted or disabled without rooting the device.

However, there are some useful apps, too. For example, there’s Super Note for taking notes, Splendid for changing the display settings, and Power Saver for optimising the battery.

The Zenfone 4 features a bright 4-inch, 480 x 800 resolution display with a layer of Corning Gorilla Glass 3, which should make it resilient to scratches and minor knocks and bumps. While the screen is fine for those who intend to use it for basic tasks of calling and sending text messages, the low resolution means it’s not suitable for gaming and watching videos as the screen suffers from reflections and poor viewing angles. It’s almost impossible to see the screen clearly in bright outdoors.
Asus packs the Splendid app, which helps you enhance the display quality to an extent. But even the app does little to improve the viewing-angle problem.

The Zenfone 4 runs on the Intel Atom Z2520 dual-core processor clocked at 1.2 GHz and backed by 1GB RAM. While this seems adequate on paper, in practice, it feels slower than the Moto E, Nokia Lumia 530 and the Micromax Canvas A1 Android One.

It does a good job at handling everyday tasks. Web pages, including those with lots of images and graphics load quickly and it can switch between apps seamlessly. The Zenfone 4 is slightly slow to start up, taking a little more than half a minute before you can start using it. Some of the heavier apps don’t load quickly, while some take longer than the usual time to respond. There’s also a noticeable stuttering when playing games such as Temple Run 2 or running multiple apps in the background. 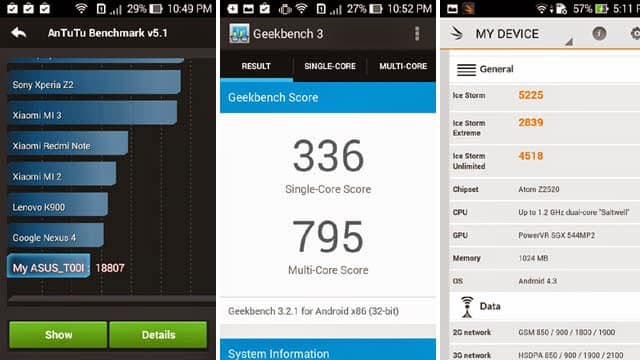 Some Benchmark test results of the Zenfone 4

The Zenfone 4 comes with 8GB of internal storage, of which, around 5GB is available for use. You can expand the storage up to 64GB using the micro SD card slot. Asus’ customised settings allow you to select the SD card as the default storage location for installing new apps (provided the app allows it). 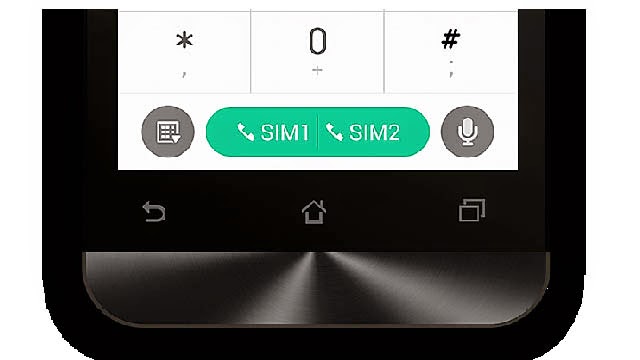 Sound quality on calls received by the phone is really good, though calls made by the phone are average with speech sounding muffled when there’s background noise.

You get two apps for playing music – Google Play and the default device music player.
The default music player neatly categorises songs based on the album, artist, song name, genre, composer and folder. You can mark your favourite songs or quickly play files that you’ve recently added or played frequently. The app lets you play songs saved online, by adding your Dropbox, OneDrive, Google Drive or Asus WebStorage account. This comes handy if you don’t have enough space to store songs on the device, though you’ll need to rely on a Wi-Fi network or cellular data to stream music from your cloud account. The music player also includes an equaliser for fine tuning your audio. 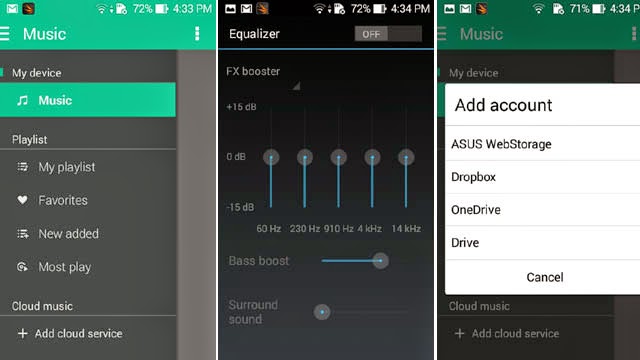 The AudioWizard app lets you choose the audio mode to optimise the speaker sound depending on what you are doing. It includes audio pre-sets for getting the best effects when watching movies, recording sounds, gaming and for listening to music.

There’s an FM radio, too and the Movie studio app for editing videos using your phone. Asus does not pack headphones with the Zenfone 4, so you’ll need to get your own pair of good headphones with to listen to music.

Picture quality of the 5MP camera is not too exciting. In the auto mode, the camera keeps noise levels low and produces images with decent clarity in normal light conditions. Colours can be a bit oversaturated, but it’s OK for a camera in this price range. The camera is mostly fast at capturing shots, though it can struggle to focus correctly in dim light and when trying to take close ups. 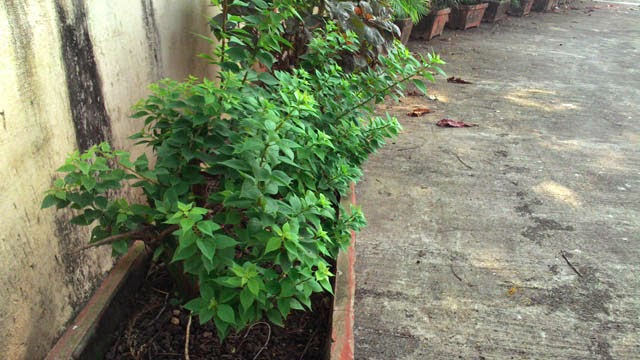 There are plenty of image modes including Time rewind which lets you save the best shot from a series of shots taken by the camera, a panorama mode, GIF animation and miniature modes, which you might not find in a budget phone.

There is an HDR mode, too, but it tends to add more noise and makes colours look very unnatural. 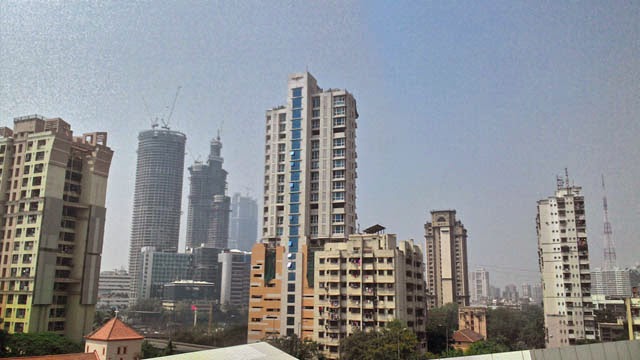 Photos in the HDR mode are inconsistent with colours 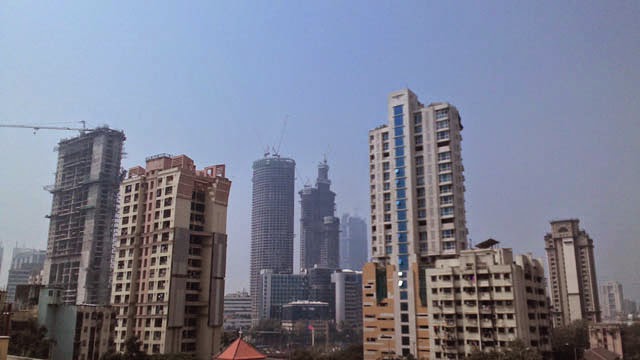 Picture quality in the Auto mode

There is a 0.3MP front-facing camera. This might seem like a valuable addition over the Moto E and the Nokia Lumia 530 that don’t have front cameras at all. However, photos taken with the front camera come out very dark and pixillated, which hardly makes it useful.

The Zenfone 4’s 1200mAh battery provides average battery life. In our tests, it gave over 13 hours of calls on the 2G network or nearly five hours of video playback (720p) before we had to plug it to the mains. This is not the best in its class, considering the 18-hour plus battery life of the Micromax Canvas A1 Android One and the Moto E. However, it should be enough to get you through a 12-hour day.

The Asus Zenfone 4 packs lots of features into a tiny package. But the budget price means that the phone has cut corners, which is evident in the low-resolution display and underpowered processor and camera. Yet, there’s lots to like about the Zenfone 4: the design and the build quality is one of the best we’ve seen on a budget phone, it’s simple to use and basic functions run smoothly. It also lets you boost the storage with the SD card slot. If you are cash-strapped, looking for an Android phone that provides good value for money, the Zenfone 4 is one of the best phones you can buy at the moment. Though not all, it checks most boxes to be a solid budget smartphone. However, if you need a slightly better display and battery life then go for the Moto E.