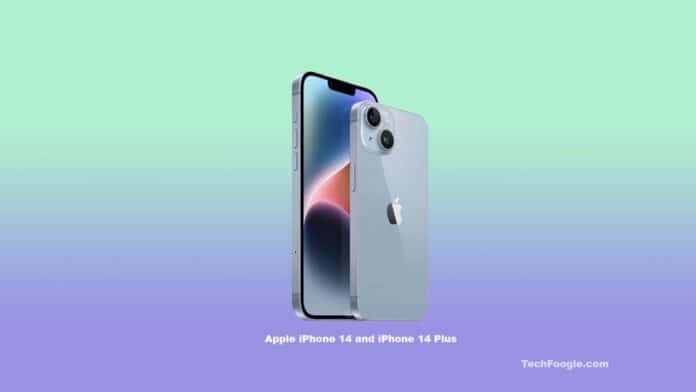 Apple also announced the iPhone 14 and the iPhone 14 Plus during the ‘Far Out’ launch event, along with the iPhone 14 Pro series. The brand has abandoned the “Mini” iPhone in favor of a larger “Plus” model this year, which confirms the speculations. Additionally, Apple explained how it will differentiate between the regular and Pro versions while just making slight improvements to the iPhone 14 and 14 Plus. After that, let’s examine the improvements and attributes of the new iPhone 14 models.

iPhone 14 and iPhone 14 Plus Details

The design of the iPhone 14 and 14 Plus is, as can be seen immediately, unaltered from the iPhone 13 series of the previous generation. The twin cameras on the back are supported by both versions, as well as the smaller notch that was introduced last year. The non-Pro iPhone 14 variants are available in 6.1-inch and 6.7-inch screen sizes, which is the sole distinction, as was already mentioned. It is no longer possible to buy the 5.4-inch tiny model.

The OLED panels used in the Super Retina XDR displays offer up to 1200 nits of peak HDR brightness, a contrast ratio of 2,000,000:1, and Dolby Vision. In addition, Apple’s Ceramic Shield protects the panels here. In terms of cameras, you get a 12MP primary camera with sensor-shift OIS and a 12MP ultra-wide camera. There’s also a 12MP TrueDepth camera in the front notch.

The look of this year’s non-Pro iPhone 14 models isn’t the only thing that hasn’t changed. Apple has also opted not to incorporate its newest A16 Bionic chipset under the hood. According to reports, the iPhone 14 and iPhone 14 Plus are powered by the same A15 Bionic technology that powered last year’s iPhone 13 series.

Do you want to know whether it improves anything? Instead of the A15 CPU present in last year’s non-Pro versions, the iPhone 14 uses the significantly more powerful A15 Bionic chipset with a 5-core GPU found in iPhone 13 Pro models. And, as usual, Apple did not reveal the RAM and battery capacities of the new iPhone 14 versions. The storage options, on the other hand, range from 128GB to 512GB for the basic model.

Lastly, the iPhone 14 and 14 Plus will be among the first handsets to ship with iOS 16. They also include new features like Crash Detection and Emergency SOS via Satellite. The latter “combines proprietary components closely linked with software to allow antennas to connect directly to a satellite, enabling messaging with emergency services while outside of cellular or Wi-Fi coverage,” according to Apple’s blog post. In November, users in the United States and Canada will be able to use the Emergency SOS function.

The beginning price of the iPhone 14 in India is Rs 79,900, the same as that of the iPhone 13 from the previous year. Apple has not raised the costs of the non-Pro variants. The iPhone 14 Plus, which succeeds the mini, has a Rs 10,000 higher starting price in India and costs Rs 89,900.

iPhone 14 Plus Price in India

Last but not least, starting on September 9 you can pre-order the iPhone 14 Pro and 14 Pro Max, which have an improved design and a larger, 48MP camera configuration. On September 16 in India, these two versions will be for sale. Which among the four models will you purchase this year? Will there be a discount on an older iPhone during Flipkart or Amazon hours, or will it be the iPhone 14 Pro with the pill-shaped notch?