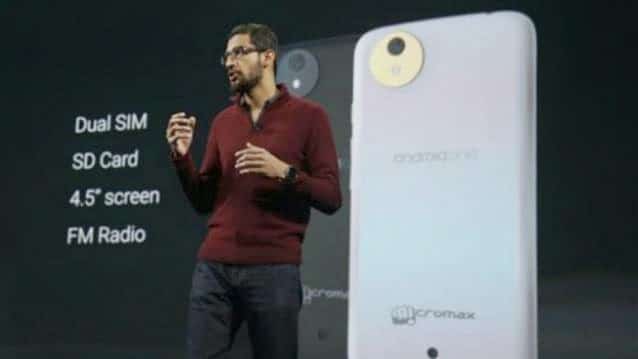 The last few months have witnessed a mid-range and low-end revolution in India, with the arrival of the Xiaomi phones, as well as announcement of upcoming phones from the likes of Motorola, OnePlus and other Indian brands. Firefox OS is here too, lowering the price threshold for smartphones. With smartphone leader Samsung ceding ground to rivals, the stage is set for any manufacturer willing to take the initiative to sweep the Indian market. Curiously though, it’s not the vendors that have the biggest plans for such a sweep, but Google itself.

The Android One launch is expected to happen in India on September 15 at an event Google India has invited media for. At I/O we witness the unveiling of Android One, a version of Google’s Android designed for low-cost phones, that are expected to retail for under $100. Google’s Android One initiative promises to change the experience of budget smartphones. By working closely with manufacturers, component makers and production companies, Google is hoping to eliminate some of the pitfalls such as performance, longevity and software updates that have long plagued this segment.

With a focus on sub-$100 smartphones, Google is hoping to bring more people into the Android fold. One could wonder why exactly Google is planning such a massive push, where besides working with manufacturers before and during production and it will also give vendors room under its marketing umbrella. Google will reportedly spend more than Rs 100 crore on advertising and marketing, and bringing these devices to a mainstream audience.

The answer is two-fold. One Google wants to ensure India remains an Android-first market. Secondly, it wants to nip the rising tide of Android forks in the bud. India may not be a big market for Android forks yet, with Nokia X bombing, but there’s room for brave manufacturers to make that play and still earn a foothold. Google will obviously not see much revenue from Android forks, and that’s what Android One is hoping to prevent.

More hints about Google’s plans can be seen in the list of hardware partners. Not only are Micromax and Karbonn part of Google’s plans, but Android One hardware will also be produced by Intex, Celkon and Spice, none of which are reputed to be great OEMs, and have worse market standing than Micromax and Karbonn. This indicates Google is preparing a mass market strategy, releasing several devices at one go.

In a way, Google is mirroring the efforts of Microsoft, which continues to see success in the low-end Windows Phone segment. Microsoft not only worked with manufacturers but has actively promoted the new players in the ecosystem. Google took a page out of that at I/O. For its Indian hardware partners, Android One is a garden path to global legitimacy something that has eluded them so far. With Google’s backing, the collective standing of Indian brands will certainly rise. So in a way, it’s a win-win move for Google and Indian smartphone makers.