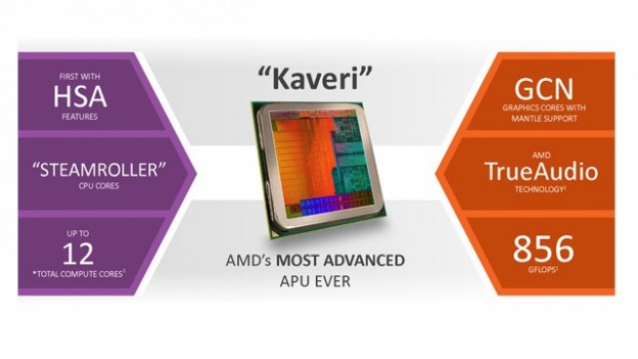 AMD announced its new generation of A-series Accelerated Processing Units or APUs which will feature the AMD Radeon R7 series graphics solution. Codenamed Kaveri, these APUs were announced in India today and will be the first series to support heterogeneous system architecture (HSA). Three new chips have been announced, namely the AMD A10-7850K, AMD A10-7700K and AMD A8-7600, and each of them sport the new Radeon R7 graphics solution.

Kaveri bridges the infrastructure of AMD’s CPUs and APUs with FM2+ socket compatibility. With up to 12 Compute Cores (4 CPU and 8 GPU), it unlocks the full potential of the APU. HSA is a new intelligent computing architecture that enables the CPU and GPU to work in harmony by seamlessly streamlining right tasks to the most suitable processing element, resulting in performance and efficiency for both consumers and developers.

The APUs also feature Graphics Core Next (GCN) Architecture with AMD Radeon R7 Series graphics which have support for DirectX 11. Kaveri brings a new API, AMD Mantle, that simplifies game optimizations for programmers and developers to raise gaming performance
In addition, the APUs come with AMD TrueAudio Technology, support for UltraHD (4K) resolutions and new video post processing enhancements that will enhance 1080p video quality when scaled up on an UltraHD monitor or TV.

AMD will bundle EA’s Battlefield 4 along with the A10-7850K and A10-7700K APUs. The product specifications are as given in the table below

Stay tuned for a full review of the Kaveri APUs as soon as we get our hands on them.