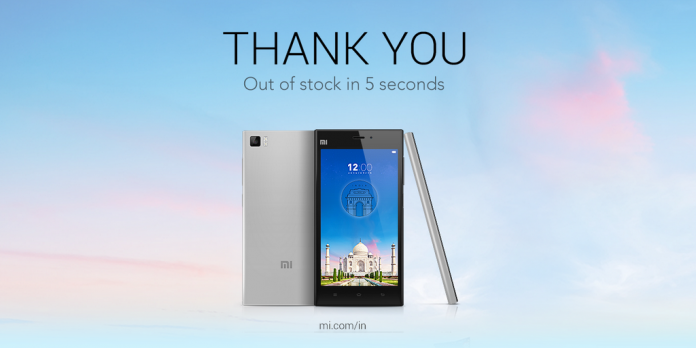 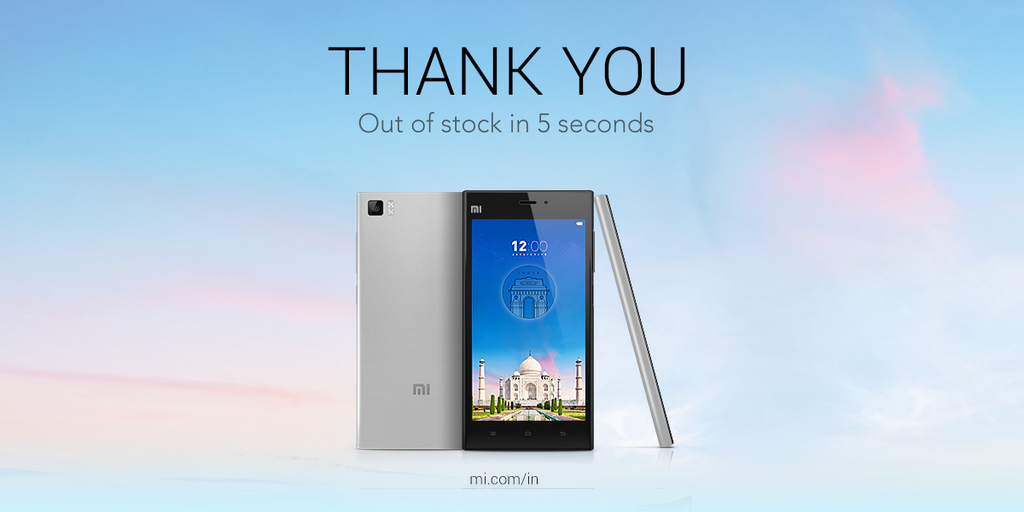 NEW DELHI: Chinese smartphone manufacturer Xiaomi has claimed that its Mi 3 smartphone went out of stock in just 5 seconds, the second time when it was put up on sale on Flipkart today. Last week, it had taken 39 minutes for the stock to finish when Mi 3 was first put on sale by the company.

Xiaomi has, like last time, not revealed exactly how many units were up for sale in this round. However, import-export tracking website Zauba has revealed that only 10,400 units of Mi 3 smartphone were brought to India on July 25.
In the first round of sales, as many as 1 lakh people had registered for the device on Flipkart, but only a few successfully managed to get one. In the second round, Xiaomi allowed more people to register for the devics

Note that users who have previously registered will have to register again for a chance to purchase.
— Xiaomi India (@OfficialXiaomi) July 29, 2014

Many Twitter users who registered for the sale reported that they encountered errors and some said that the phone went out of stock even before they could log in.

Many frustrated users felt it would make much more sense for Xiaomi to first clear up the pent up demand of the initial 1 lakh registrants. Otherwise, those who registered in the first round, but did not get to book a unit of the smartphone, will only feel cheated. The company’s current strategy suggests that it is looking to inflate demand without any transparency about the actual number it sells.

“Flash sales” like these frustrate potential buyers and make a mockery of the smartphone sale process itself. The least a company like Xiaomi, which found favour among the cost-conscious Indian buyers with an astounding price tag, could do is to reveal how many units it is importing to the country.

At present, Xiaomi is only gaining notoriety for teasing buyers with a feature-packed smartphone at a very competitive price, but not really delivering it to those who want to buy one. Selling limited numbers through a single online vendor is akin to creating artificial shortages that smartphone makers seem to have developed as a marketing tool, pointed out an avid industry watcher upon condition that he not be named.

We spoke to the company’s media relations team, but the spokesperson remained evasive on the issue.

Here are a few reactions of Twitter users to Xiaomi’s out-of-stock announcement:

Xiaomi Mi3 sale got over by the time people learnt how to pronounce XIAOMI.
— Kingslayer (@Goddamittt) July 29, 2014

Xiaomi probably gave out more Mi3 review units to bloggers than what they made available on Flipkart.
— Nikhil Pai (@nikhilpai) July 29, 2014