40,000 Xiaomi Redmi 1s units to go on sale on Flipkart this Tuesday 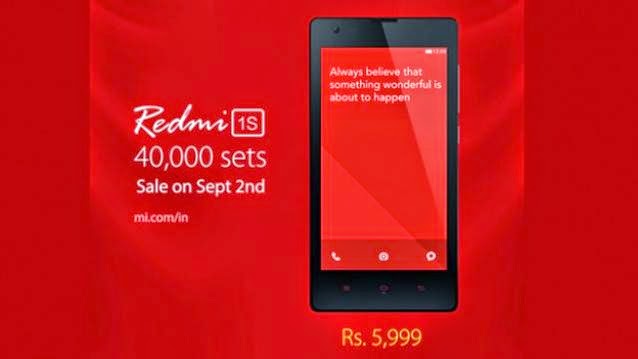 After the success of its Mi 3, Xiaomi is all set to bring yet another uber-affordable smartphone with awesome specs in India. The Redmi will be up for grabs on September 2, following the ‘Xiaomi Tuesdays’ trend. The company, known to reveal information via its social channels, now reveals that 40,000 units of the device will go on sale on September 2. It is almost four times the number of Mi 3 units put up for sale in the first batch.
It should be noted that Redmi 1s is a budget phone priced at Rs 5,999, and the company is betting big on its success. Looking at its specs and the price point, we wouldn’t be surprised if the company manages to achieve yet another record sale in seconds.
Following the similar annoying strategy seen during Mi3 flash sale, users will have to register to participate in the sale. Registration doesn’t guarantee a unit and it only means you are eligible to buy one. The company claims to have already received over 1,00,000 registrations, but the window is still open. No wonder, the company is accused of creating more demand than it can supply.
In July, Xiaomi had announced that the Redmi 1s will be sold at Rs 6,999 for the Indian market. However, the price has been dropped to 5,999 to further intensify the competition in the budget mobile segment in India. Despite the affordable price tag, the Redmi 1s comes with high-end specifications such a jaw-dropping quad-core 1.6GHz Qualcomm Snapdragon 400 MSM8228 processor, 1GB RAM and an Adreno 305 GPU.
The Redmi 1S sports a 4.7-inch 720p IPS display. It comes with 16GB of onboard storage and a microSD card slot that further expands it up to 64GB. It is fuelled by a 2000mAh battery and runs Android 4.3 Jelly Bean with Xiaomi’s MIUI layer on top. There’s an 8MP rear shooter and a 1.6MP front camera.
Compared to smartphones in the similar price range, the Redmi 1S sports a larger and sharper 312 ppi display, thanks to the HD resolution. In terms of processing speed, it should offer a tad better performance than the Moto E and Asus Zenfone 4. Take a look at how it stacks up against the Moto E and Zenfone 4.