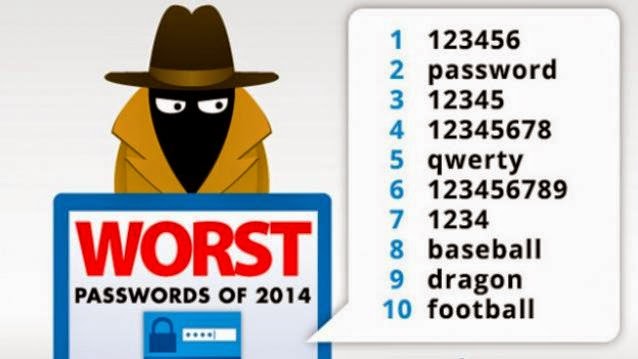 In the wake of hacks and stolen passwords, it is quite essential to come up with a password that is hard to crack. However, it looks like most people still don’t take security very seriously.

SplashData has compiled its annual list of the millions of passwords that were stolen and made public throughout the year. On assembling them in order of popularity, it has been revealed that several users carelessly still use passwords such as “123456”, “password”, “12345”, and so on.

“Passwords based on simple patterns on your keyboard remain popular despite how weak they are,” said Morgan Slain, CEO of SplashData. “Any password using numbers alone should be avoided, especially sequences. As more websites require stronger passwords or combinations of letters and numbers, longer keyboard patterns are becoming common passwords, and they are still not secure.”
Take a look at the complete list here.

Too often we think our passwords are safe just because we use an alphanumeric combination and trust web encryption to keep it safe. But incidents of password theft, failing encryption are worryingly common these days.

Heartbleed vulnerability highlighted how easy it is for anyone to gain access to our passwords on compromised websites, while other vectors have also since been unearthed. In a word, none of your regular ‘word’ passwords are entirely safe.

SplashData, who also provides SplashID line of password management applications, releases its annual list in an effort to encourage the adoption of stronger passwords. It is a reminder to not be one of the idiots using these passwords and make your accounts susceptible to hacking.  In case, you are using a password made of number sequence, your birth date or anniversary, mobile number and so on, it’s time to change it now. Users can also opt for password management apps like LastPass and SplashID.