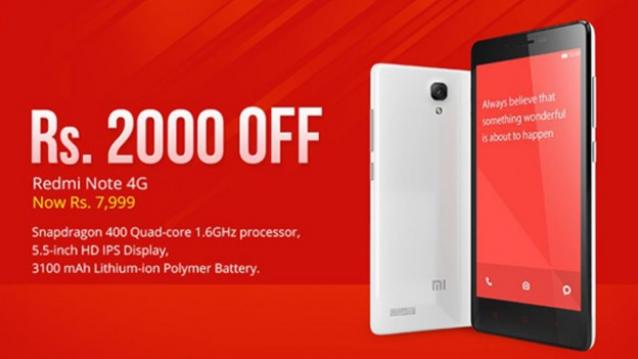 Xiaomi had taken to its social media pages yesterday and hinted at revealing something ‘jaw-dropping’ today for fans. The announcement made by the company was not the launch of a new smartphone but rather, a price cut of Rs 2000 for the Redmi Note 4G, which is now available at Rs 7,999.

Starting today, Redmi Note 4G will be available on Mi.com and across Mi India partners including Flipkart, Amazon, Snapdeal, The Mobile Stores and Airtel stores.

Redmi Note 4G first went on sale in India in December 2014. It was Xiaomi’s very first 4G device to be introduced in India, with support for both 4G bands. The Redmi Note 4 sports a 5.5-inch HD IPS display. It is powered by 1.6GHz Qualcomm Snapdragon 400 MSM8928 processor.

The device includes an onboard storage of 8GB and can be further expanded up to 32GB via microSD card. The smartphone comes equipped with a 13MP rear camera along with a 5MP front shooter for selfies. It is powered by a 3100mAh battery and runs Xiaomi’s MIUI OS.

The Redmi Note, if you recall, is something of a record breaker in terms of sales, with Xiaomi having sold 10,000 units in just a second in Taiwan.