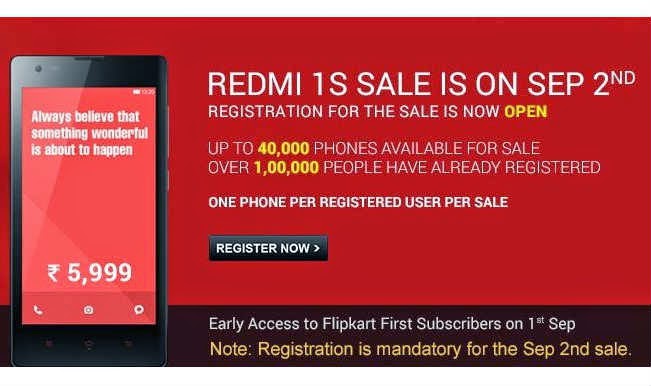 Xiaomi Redmi 1S went on sale today, September 2, 2014 and was sold out within seconds. The phone was out of stock at 2:01 pm even though the sale started at 2pm. The phone, considered to be a competition to Moto E but having specifications of Moto G is priced at Rs 5,999. The price was brought down from Rs 6,999 as was initially planned. 40000 phones went on sale with 2000 being sold yesterday to Flipkart First subscribers and the rest 38,000 going on sale today.

The phone comes with complimentary screen protector and a micro SIM adaptor, apart from the usual accessories that come with the phone. Flipkart has given an estimated delivery period of 7-10 days for the phone.

The next sale for the Xiaomi Redmi 1S will be on September 9, 2014 and registration for the sale will start at 6PM on 2nd Sep. The Redmi 1S has a 1.6 GHz quad-core Qualcomm Snapdragon 400 processor with Cortex-A7 core and Adreno 305 image processor. The phone has an 8GB flash memory. It has a 4.7 inch display with a resolution of 1280 x 720 with 312 ppi. It has an 8MP primary camera and a 1.6MP secondary camera.