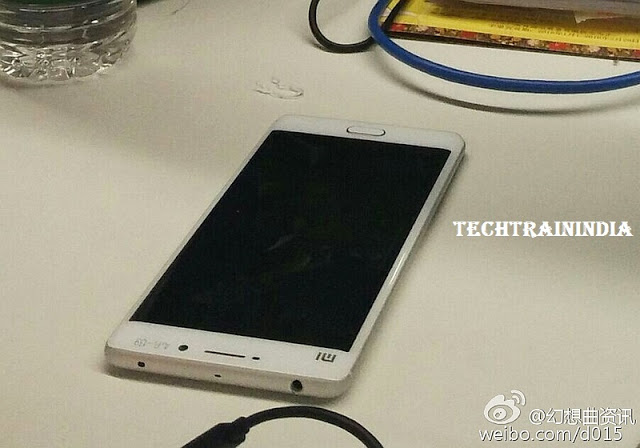 The anticipated Xiaomi Mi 5 smartphone has purportedly been spotted in a leaked image, posted by a user on Weibo. The live image shows the smartphone’s sleek design profile along with the front panel curving towards the sides of the handset. We have seen similar design sported by the Samsung Galaxy S6 Edge and the Galaxy S6 Edge+ smartphones, however, in this case the display does not appear to be curved.

Also seen in the image posted by News Fantasia is that the Mi 5 sports a home button and what looks like an infrared emitter on top besides the headphone slot. It is worth mentioning that the smartphone design tipped in the leaked image falls in line with the previously leaked render images of the handset.

Until now, the Xiaomi co-founder has confirmed that the Xiaomi Mi 5 will run on Qualcomm Snapdragon 820 processor and will launch after the Spring Festival, which this year starts on February 8, and lasts 15 days. The executive later revealed that the smartphone will go on sale a week after launch.

Based on preliminary leaks, the Mi 5 is said to feature a 5.2-inch display with either full-HD or QHD resolution. The handset is said to come in two memory and storage versions – 3GB of RAM with 32GB inbuilt storage, and 4GB of RAM with 64GB storage. On the camera front, the Mi 5 is rumoured to pack a 16-megapixel rear camera and a 13-megapixel front-facing camera. It is also supposed to be backed by a 3600mAh battery with Quick Charge 3.0 tech. The handset is said to run MIUI 7 based on Android 6.0 Marshmallow.

Xiaomi’s Mi 5 is one of the most anticipated flagship smartphones for the company as a lot rides on the success of the device. Recently, the company announced that it had shipped over 70 million phones in 2015, which was below the company’s expectations.