Who owns a selfie taken by a monkey? Wikipedia battle to go to court 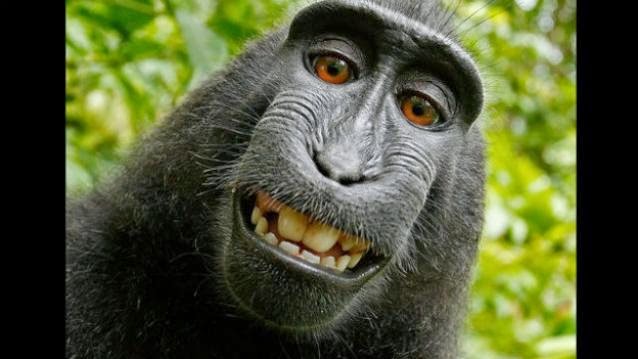 The Monkey at the centre of the controversy.

Wikipedia is currently embroiled in a unique legal battle with British Photographer David Slater. The problem: Slater wants Wikipedia to take down the image of a Macaque smiling straight into the camera. This is a picture that was taken in 2011 in Indonesia when Slater was trying to take snaps of monkeys, except that one monkey stole his camera and took a selfie. And now Wikipedia says that they won’t take it down since the monkey took the image and thus owns it.

Slater had told Telegraph UK at the time when the pics had first caused some interest in 2011, “They were quite mischievous jumping all over my equipment, and it looked like they were already posing for the camera when one hit the button. The sound got his attention and he kept pressing it. At first it scared the rest of them away but they soon came back – it was amazing to watch.”

The picture is currently up on Wikipedia Commons which is a database of images and videos that are free to use by anyone online. And while Wikipedia is sticking to the argument that the monkey that took the image owns it, Slater says the court needs to take a call on this.

He told Telegraph, “If the monkey took it, it owns copyright, not me, that’s their basic argument. What they don’t realise is that it needs a court to decide that.” He also faces a legal bill of £10,000, adds the report.

According to Slater, he’s doing this because photography is his bread and butter and after all it was his equipment that the monkey used. “For every 10,000 images I take, one makes money that keeps me going. And that was one of those images. It was like a year of work, really, ” he told Telegraph.

The debate has raised an interesting question on who owns the selfie taken by a non-human. Interestingly as this BuzzFeed article points out Wikipedia is sticking to the picture not because it really thinks that the monkey owns the image, but because as the work of a non-human animal, it has no human author in whom copyright is vested.

According to Telegraph, Wikipedia also noted in its report on, “to claim copyright, the photographer would have had to make substantial contributions to the final image, and even then, they’d only have copyright for those alterations, not the underlying image. This means that there was no one on whom to bestow copyright, so the image falls into the public domain .”

While the debate over authorship continues, it remains to be if court rules in Slater’s favour.