What is an eSIM and what are its implications? Know Everything About It 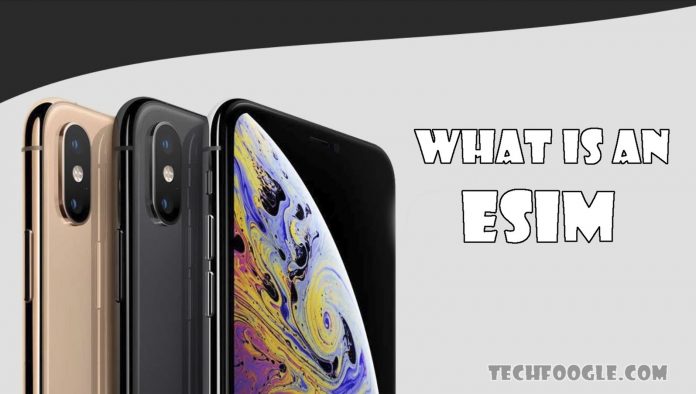 eSIM! For the last few days this new name in the country is very much discussed. You have probably heard about eSIM recently and wondered what is the new kind of eSIM?

In the coming time, we can see that electronic SIM cards are used in phones and networks. I.e. the need for physical SIM card will be eliminated. Apple has made a new start by giving eSIM connectivity in its New iPhones (iPhone XR, iPhone XS and iPhone XS Max) in India.

What is an eSIM?

‘eSIM’ relates to a new standard which is promoted by GSMA. GSMA is an association that prints worldwide network operators. It comes in the device as an integrated SIM and cannot be separated from the device.

It is an integrated eSIM and it is formally known as the Embedded Universal Integrated Circuit Card  (eUICC). Its length is just 6 millimeters and the width is 5 millimeters and it is applied only to the device’s motherboard at the time of manufacturing and it can work with a common removable SIM. It has M2M (Machine to Machine) and Remote Provisioning capabilities.

With the remote provisioning capability in eSIM, user gets great customer experience while activation and phone management. You can choose user operator and plan by going to the settings of the phone. In 2016, eSIM was first used in the Samsung Gear S2 3G. But eSIM Technologies came in Spotlight via Apple Watch 3 eSIM has also been used in the Google Pixel 2 Smartphone.

What is the advantage of eSIM?

The biggest advantage of eSIM is its size. It’s like a small piece of a nano SIM too. Due to its size, it easily fits into ultra-compact gadgets such as Watch because there is no space for a normal SIM in such devices. That means the device will be more compact.

The biggest advantage of eSIM is that you can switch to a new operator and you will not need to add a new SIM card. Another advantage would be that if you are travelling, switching to the local network will be easy through eSIM.

That is, everything is possible through software. eSIM is essential for those who want to use the same phone number on two gadgets like Smartphone and Smartwatch. It is possible to call from a device even when there is no other device.

The first thing is that if you change your network right now, then you have to wait for the activation of the new SIM card by going to the telecom operator’s store. But if you are an eSIM, you will not have to go to the operator store, just talk to customer care and your new network will become active through a user ID and password from here.

Time to change the physical SIM card will save time. This time will be saved in eSIM card and it will be much safer.

Now when you replace the device, you also put your SIM card in the old device. But when you come to eSIM, you will not have to change anything. Only the user id and password will be all done.

Talk about the coming time, not only iPhones, but all the phones in one day can be used only as eSIM cards. GSMA has also announced a standard for this new type of SIM. In addition to Samsung and Vodafone and many other operators are also in the process of adopting this technique.

Currently, network data stored in standard SIM will be rewritten into future eSIM devices. That is, just one or two phone calls and you will be able to change your network operator.

Another problem with physical SIM cards is that it comes in two or three sizes now. I.e. any device will be used like iPhone or Android, SIM card with SIM slot size will not be a problem.