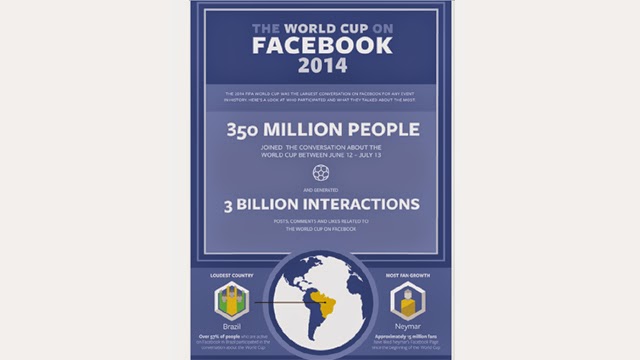 The 2014 FIFA World Cup that concluded with Sunday’s 1-0 extra time, witnessed a series of dramatic events unfold including Luis Suarez biting Giorgio Chiellini during the Uruguay vs Italy game on 24th June and Pepe’s red card during Germany vs Portugal on 16th June. Fans obviously had a lot to say, taking their sentiments to social media about the players and the game.

According to Maxus Insights’ Social Media Statistics, India alone showed a rise of 4.4% in the game, with over 3.5 million engaged users on the Facebook page.

According to Facebook, 350 million people joined the conversation about the World Cup between June 12 to July 13. The loudest country was none other than the land of soccer – Brazil, with over 57% people participating in the World Cup conversation. Neymar showed the highest growth in the number of fans, with nearly 15 million likes for Neymar’s Facebook page since the beginning of the World Cup.