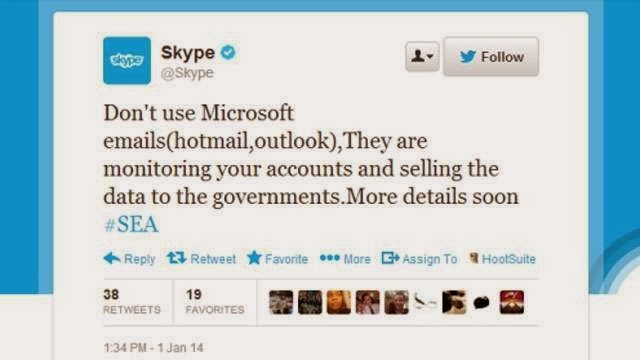 The group also posted the contact information of Steve Ballmer, Microsoft Corp’s retiring chief executive, on its Twitter account along with the message, “You can thank Microsoft for monitoring your accounts/emails using this details. #SEA” That message was an apparent reference to revelations last year by former National Security Agency contractor Edward Snowden that Skype, which is owned by Microsoft, was part of the NSA’s program to monitor communications through some of the biggest U.S. Internet companies.

Hacked by the SEA

A message posted on Skype’s official Twitter feed on Wednesday, apparently by the hacking group, read: “Don’t use Microsoft emails (hotmail, outlook), They are monitoring your accounts and selling the data to the governments. More details soon. #SEA” Similar messages were posted on Skype’s official Facebook pages and on a blog on its website before being taken down in late afternoon. The SEA later tweeted out copies of the message “for those who missed it.” Representatives for Microsoft could not be reached for comment.

The NSA’s practices essentially made Microsoft and other technology companies partners in government surveillance efforts against private citizens in the United States and elsewhere. Last month Microsoft joined seven other top technology companies in pressing President Barack Obama to rein in the U.S. government’s electronic spying in a meeting at the White House. Media companies, including the New York Times and the BBC, have repeatedly been targeted by the Syrian Electronic Army and other hacker activist groups that deface websites and take over Twitter accounts.

Obama and his national security team are trying to decide what recommendations to adopt from an outside panel’s review of the NSA’s activities. A U.S. District judge in December ruled that the U.S. government’s gathering of Americans’ phone records is likely unlawful and raised what he called “serious doubts” about the value of the so-called metadata counter-terrorism program. A second federal judge ruled later in the month that the program was constitutional, raising the likelihood that the issue will be settled by the U.S. Supreme Court.

This week, a monitoring group said the death toll in Syria’s civil war, which began in March 2011 as peaceful protests against four decades of rule by Assad’s family, had risen to at least 130,000.