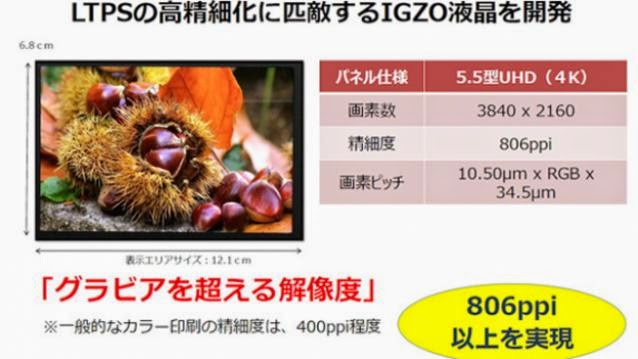 Japanese display manufacturer Sharp has just announced a high resolution display for smartphones. Sharp will make 5.5-inch IGZO screens with 4K (Ultra HD) resolution to be used in flagship smartphones from 2016 onwards. The 2160 x 3840 pixel resolution on a 5.5-inch display will give a pixel density of a whopping 806 pixels per inch.

After Samsung, which is expected to fit its upcoming Galaxy Note 5 with a 4K AMOLED display, Sharp will be the second display maker to attain the feat.

While Sharp hasn’t revealed which devices will be the first to sport the 4K IGZO displays, a report in BGR states that the IGZO displays will most likely be supplied to Apple for some of its products.

We have seen phones with 1440p panels since last couple of years and they are yet to go mainstream. To have a 4K display sporting smartphone as early as next year is a quick jump. The only advantage about having 4K displays on smartphones is that it will get the prices of full HD and HD panels down.

But honestly speaking, 4K displays on a smartphone (with an 806ppi pixel density) surely seems like an overkill. For starters, it is really challenging to even demarcate pixels between a full HD and 1440p panel on a sub-6-inch display. With a 4K panel it will be even more difficult. Not to mention, higher resolution display means that more battery will be used to power the display vis-a-vis a full HD or 1440p panel. To be able to use a smartphone with a 4K display effectively, one will need a powerful GPU as well. Also, with the 1440p panel yet to go mainstream, the production demand for the 4K panel will be quite limited. That does not help with the economies of scale production model.

All these things will certainly add into the cost and phones sporting the 4K panel will certainly be sold at a premium, unless makers are willing to take a price cut to get the first mover advantage.

So while a 4K smartphone panel certainly sounds tempting, one needs to take into consideration other aspects around it as well.