Sandisk announces 512GB SD card, the biggest in the world 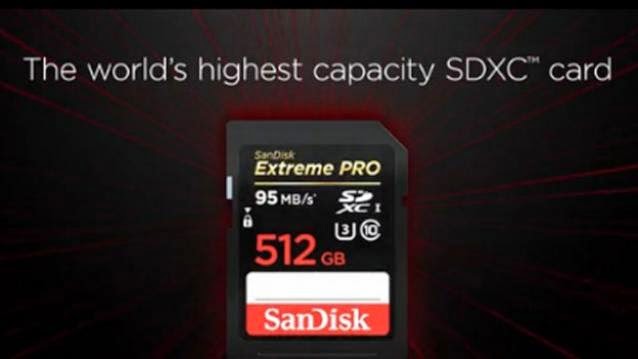 While 128GB seemed like an enormous storage space fitted inside a minuscule memory card, Sandisk has now taken a leap by launching a gigantic 512GB SD card. The Sandisk Extreme PRO SDXC UHS-I packs in 512GB into its flat frame – the highest ever seen on an SD card.

SanDisk unveiled its first 512MB SD card in 2003, though capacity demands have increased exponentially in just over a decade.  The new 512GB SanDisk Extreme PRO SDXC UHS-I card represents a 1,000-fold capacity increase at the same size footprint. This translates to nearly 800 music albums in MP3 format or more than 150 movies. It claims to deliver write speeds of up to 90 MB/s and comes under the UHS Speed Class 3 (U3) category – ideal for high-resolution video recordings and even 4K Ultra HD videos. This Sandisk also claims transfer speeds up to 95 MB/s, though actual read and write speeds may differ.

Needless to say, the massive 512GB SD card doesn’t come cheap. You’ll have to shell out a whopping $799, which translates to approximately Rs 48,700. However, it could be priced slightly lower when available via retailers and online stores. “SanDisk currently charges $338.99 for a smaller 64GB SD card with the same features, something you can find for less than $100 from numerous online retailers,” points out TheVerge.

“The new 512GB SanDisk Extreme PRO UHS-I card offers incredible speed and capacity,” said Grant Petty, CEO, Blackmagic Design. “Our Pocket Cinema Camera customers shoot in every type of circumstance and location, and get amazing wide dynamic range RAW images capturing the brightest highlights and darkest shadows at the same time. The additional capacity of the SanDisk Extreme PRO UHS-I card will extend the creative freedom for our customers shooting in RAW and open up the ability to use wide dynamic range RAW files with even more productions.”

The new 512GB card is aimed at 4K content. It offers both the speed and capacity needed to support 4K Ultra HD video capture, which you can watch on a 4K TV. Other key features include its build quality, which has been tested against harsh conditions to protect it against extreme weather conditions, water, shocks, and X-rays. Sandisk also backs it with lifetime limited warranty and the RescuePRO Deluxe data recovery software which helps restore accidentally-deleted images.