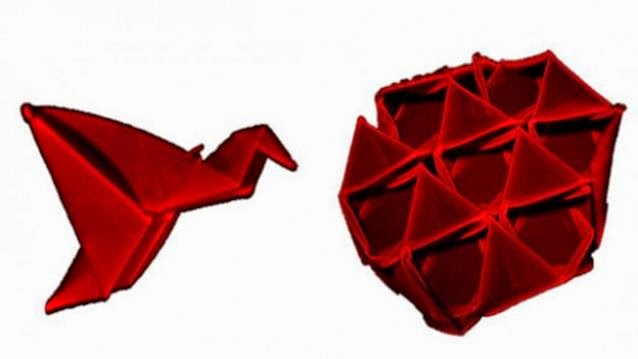 Inspired by the Japanese art of origami, researchers have found a way to make reversibly self-folding three-dimensional (3D) structures.

While the Japanese art of origami has been “a rich source of inspiration” for scientists working to construct such 3D forms, the limitation to simple shapes has held up development of new applications in areas such as biomimetic systems, soft robotics and mechanical meta-materials, especially for structures on small length scales where traditional manufacturing processes fail.

Now, however, a team led by Ryan Hayward has developed an approach that could open the door to a new wave of discoveries.

“We have designed and implemented a simple approach that consists of sandwiching a thin layer of a temperature-responsive hydrogel with two patterned films of a rigid plastic,” said Hayward.

“The presence of gaps in the plastic layers allows for folding by a controlled amount in a specified direction, enabling the formation of fairly complex origami structures,” Hayward added.

The team uses a mask-less lithographic technique based on a digital micro-mirror array device to spatially pattern the cross-linking of the polymer films, and then dissolves away the uncross-linked regions with a solvent.

By directly patterning the polymer films, rather than using a traditional photolithographic approach based on a photoresist layer, it is possible to pattern multiple layers of polymers with widely contrasting material properties using relatively few processing steps.

In biomedicine or bioengineering, this new approach may help in developing advanced self-deploying implantable medical devices, or in guiding the growth of cells into complex tissues and organs.

Researchers said their data “suggest a clear pathway for future improvements” in the minimum achievable size and maximum achievable complexity of self-folded structures, “simply by using thinner films to enable tighter curvatures, along with improved lithographic methods to allow for patterning of smaller folds.”

Instead of following the step-by-step actuation of folds in a controlled sequence characteristic of traditional origami, the new method relies on “collapse” designs, in which all folds are accomplished more or less simultaneously.

The research appears in the journal Advanced Materials.