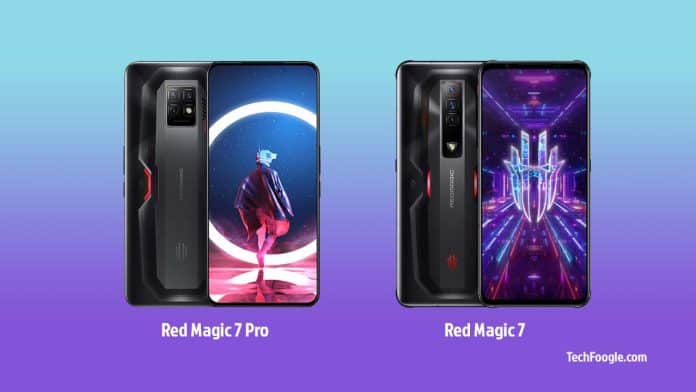 Nubia has launched the new Red Magic 7 and Red Magic 7 Pro premium gaming smartphones in China, as planned. These are powered by the newest Snapdragon 8 Gen 1 chipset and have a 165Hz display, a new ICE 9.0 cooling system, 500Hz touch sampling shoulder triggers, a 165W GaN charger, and other gaming-centric features. Here’s a list of them all.

The Red Magic 7 Pro features a flat-edge design and is the first gaming phone to use an under-the-display front camera. This frees up space for a bezel-free display. The display measures 6.8 inches and is made on AMOLED. It has a refresh rate of 120Hz, a 960Hz touch sampling rate, and a Full HD+ screen resolution. The screen is equipped with a UDC Pro chip. Up to 18GB of LPDDR5 6400 MHz RAM and 1TB of UFS 3.1 storage are supported.

A 64MP primary camera, an 8MP ultra-wide lens, a 2MP macro camera, and a 16MP front camera are all included in the camera arena. But this isn’t what the phone is all about.

The new ICE 9.0 cooling system features nine layers of cooling structure, a cooling material area of up to 41279mm2, and a 4124mm2 super big VC cooling plate, a first for a gaming phone. This contains a built-in turbofan with a low-power motor that can cool the CPU performance by 16 degrees.

The Red Magic 7 has most of the specifications of the 7 Pro, but there are a few differences. For starters, the design is unique in that the back cameras are housed in a vertical strip. Furthermore, it lacks an under-the-display camera. The phone boasts a 6.8-inch Full HD+ AMOLED display with a higher refresh rate of 165Hz and a lower touch sampling rate of 720Hz. It can accommodate up to 16GB of LPDDR5 RAM and 512GB of UFS 3.1 storage.

The camera section remains the same, except for an 8MP selfie shooter. The Red Magic 7 is powered by a 4,500mAh battery that supports 120W charging rates. Wi-Fi 6E, a 3.5mm audio connector, 5G, dual speakers, an in-display fingerprint reader, and other features are also supported by the smartphone.

Shoulder triggers, the ICE 8.0 cooling system, and other gaming-related features are also featured.

Both phones are available in a Transparent Edition and include accessories such as a Turbo Cooler (CNY 199) and a RED MAGIC Magnetic Cooler (CNY 299).