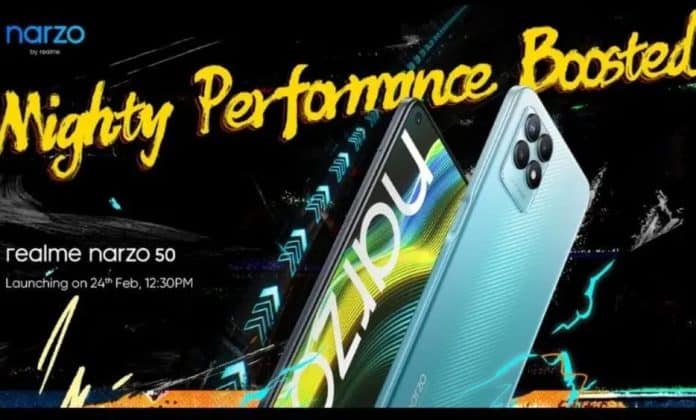 Realme Narzo 50 India Launch Date: Following a previous teaser, Realme has officially disclosed when the Narzo 50 would be available in India. The smartphone, which will join the Narzo 50A and Narzo 50i in the Narzo 50 line, will go on sale in India on February 24. The phone’s design and a few other information have also been released by the Brand. Here’s a list of them all.

The Realme Narzo 50 will be unveiled during a 12:30 p.m. EDT internet event. This launch event, like all others, will be aired live on Realme’s YouTube channel, Facebook, and other social media channels.

The Narzo 50 will also include a rectangular rear camera bump with camera housings at the upper left corner, according to the company. The back panel is textured, and the bottom half has the Narzo logo. There’s a punch-hole display upfront. The phone is painted blue in the invite image, but we may anticipate seeing more at our disposal.

In terms of specifications, the Realme Narzo 50 is said to boast the “Best Processor & Display in the Segment” and is powered by a MediaTek Helio G96 gaming processor. We may anticipate it to have quick charging capabilities and a long-lasting battery, but specifics have yet to be released.

However, reports say that the Narzo 50 will have a 6.5-inch display with a refresh rate of 90Hz. The phone is reported to include 50MP triple back cameras, a 4,800mAh battery with 33W fast charging capabilities, and other features. It will most likely have up to 8GB of RAM and 128GB of storage and will run Realme UI 3.0 on Android 12.

The Realme Narzo 50 pricing in India may decrease below Rs 20,000 and will be available for purchase through Amazon India. But we still need more specifics to get a clearer picture.