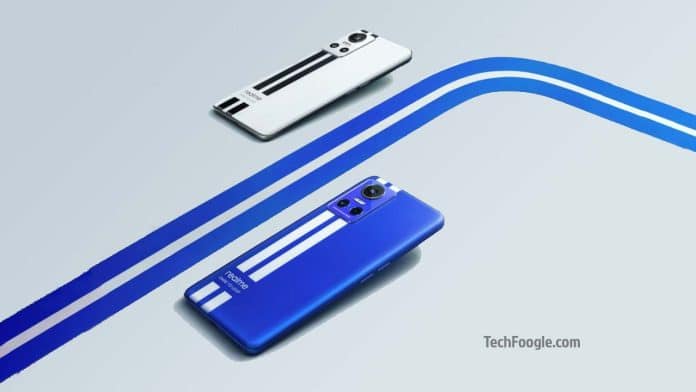 The Realme GT Neo 3 is set to launch on March 22nd, and we have a first look!

Realme previously announced that the Realme GT Neo 3 will be released shortly, and the company has now verified that the Smartphone would be released on March 22 in China. The phone’s processor and quick charging capabilities were also verified by the business. Not only that, but it’s also shown off the Realme Gt Neo 3’s design, and here’s your first look.

The Realme GT Neo 3 is here!

The brand has released a teaser picture of the Realme GT Neo 3’s rear panel, as well as the phone’s debut date, which is March 22 at 2:00 PM China time (or 11:30 AM IST). The phone has a rectangular rear camera hump with three cameras positioned in a triangle, which is similar to the Vivo X60’s design.

Paying tribute to a legendary race in 1966, #realmeGTNEO3 is inspired by _______.
Tips: 🐎 vs 🐎
Launching on Mar. 22nd, MAINLAND CHINA pic.twitter.com/JXuYpiLBKc

The difference is that two white stripes are going along the camera setup, along with the motto “Realme | Dare to Leap.” This seems to be a race track, which represents the phone’s high-speed capability. All of this is housed in a stylish blue chassis. We anticipate that more colour possibilities will be revealed at the time of the launch!

The picture also shows a volume rocker on the right side, a power button on the left edge, and a USB Type-C connector (together with the speaker grille) on the bottom edge of the GT Neo 3. There will be no place for a 3.5mm audio jack.

Expectations for the Realme GT Neo 3

As previously stated, the Realme GT Neo 3 will be powered by the newest MediaTek Dimensity 8100 processor and will include the company’s recently announced 150W rapid charging technology. This technique is said to charge 50% of the battery in 5 minutes, which is rather astounding.

Other specifics are unknown at this time. However, a recent rumour said that the phone will have a 6.7-inch OLED display with 120Hz refresh rate capabilities. It is believed to include up to 12GB of RAM and 256GB of storage.

In terms of cameras, we may anticipate a 50MP primary shooter with a Sony IMX766 sensor and OIS, an 8MP ultra-wide lens, and a 2MP tele-macro camera. A 16MP front-facing camera is reportedly anticipated to be included. A 4,500mAh battery, Realme UI 3 based on Android 12, 5G support, mid-range pricing, and other features will be included.

However, it is advisable to wait until the March 22 event to obtain a more definitive notion of the Realme GT Neo 3. Stay tuned as we shall keep you informed. Also, let us know what you think of the GT Neo 3 design in the comments section!