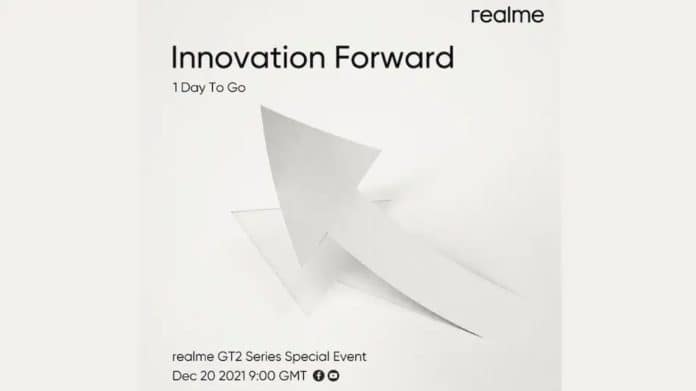 The Realme GT 2 Series event, hosted virtually next week, has been confirmed by Realme UK.

On December 20, a special Realme GT 2 Series event will be placed, with the Realme GT 2 Pro likely to be unveiled. The Chinese corporation has previously stated that its next flagship phone would be powered by the Snapdragon 8 Gen 1 processor, which was just released. A 120Hz display and up to 12GB of RAM are reportedly said to be included in the Realme GT 2 Pro. The next Realme phone is expected to appear in India early next year, however, precise details are yet unknown.

The official Realme UK account on Twitter teased the Realme GT 2 Series special event with a teaser image. According to the teaser, it will take place virtually on Facebook and YouTube on December 20 at 9 a.m. GMT (2:30 p.m. IST).

Realme has yet to divulge what we may expect to see during the event. The Realme GT 2 Pro, on the other hand, is supposed to be the show-stopper.

Realme released the Realme GT 5G, its most current flagship under the GT series, in June. The business is now preparing to launch the Realme GT 2 Pro. Realme’s most pricey flagship smartphone has been confirmed. It will also be the first phone from the firm to have the Snapdragon 8 Gen 1 SoC.

Madhav Sheth, Realme Vice President and President of Realme International Business Group, said earlier this month that the Realme GT 2 Pro will be released in December. The phone was also said to get a million-plus score on benchmarking site AnTuTu.

The Realme GT 2 Pro is said to include a 6.8-inch WQHD+ OLED display with a 120Hz refresh rate, a triple back camera arrangement with a 50-megapixel main sensor, a Snapdragon 8 Gen 1 SoC, and up to 12GB RAM and 512GB storage, according to rumours. Wi-Fi 6 and Bluetooth v5.2 connections are also rumoured to be included in the smartphone. Furthermore, a recently leaked photograph claimed that the Realme GT 2 Pro might include a selfie camera hidden behind the display.