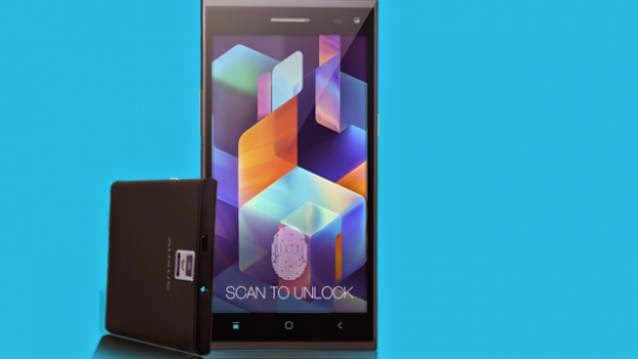 Comes with a fingerprint scanner on the back

The exciting thing about the Auxus Note 5.5 is that it’s the first Indian branded phone to have a fingerprint scanner. Priced at Rs 13,990, the Note 5.5 matches the Galaxy S5 and iPhone 5s in that department, but has a low price tag. The Auxus AX04i is priced at Rs. 6,490, and both will be exclusively available on eBay starting next week i.e August 21.

The iberry Auxus Note 5.5 comes with fingerprint scanner feature. It runs Android 4.4 KitKat out of the box. The scanner is located on the back, below the camera a la the HTC One Max. You can save up to three fingerprint profiles, and also set a security level and visible apps for each. The Note 5.5 is a dual-SIM smartphone with a large 5.5-inch HD (720×1280 pixels) Active Matrix OGS display. The device also comes with Gorilla Glass Protection.

It is powered by a 1.7GHz octa-core MediaTek (MT6592) processor, just like the Auxus Nuclea X, and features 2GB of RAM and a Mali-450 GPU. That sounds quite good for the user experience. Internally, you will find 16GB of storage, and the Note 5.5 can also take in MicroSD cards up to 64GB. In line with other smartphones in this range, it sports a 13-megapixel rear camera with LED flash, and selfie lovers should fall in love with the 8-megapixel front camera. The Auxus Note 5.5 also features something called a ‘Harlequin’ LED notification system, for alerting users when in standby mode.

In another high-end highlight, the Auxus Note 5.5 has NFC support, besides the 3G, Wi-Fi for data connections, and Bluetooth for interfacing.  Finally, there’s a healthy sounding 3200mAh battery, but no details yet on talk time and standby life.

While the Note 5.5 has some interesting features that could set it apart from the competition, the iberry Auxus AX04i tablet is a regular low-cost tablet. It has a 7-inch IPS display and comes with voice calling support, along with two SIM slots. It’s powered by a 1.3GHz dual-core (most likely a MediaTek chipset) processor clubbed with 512MB of RAM, and this one too runs Android 4.4 KitKat. With 4GB of inbuilt storage, you can add up to 64GB more via microSD card. The slate has two cameras – a 2-megapixel rear unit and a 0.3-megapixel front shooter. Finally, there’s a meagre-sounding 3000mAh battery.