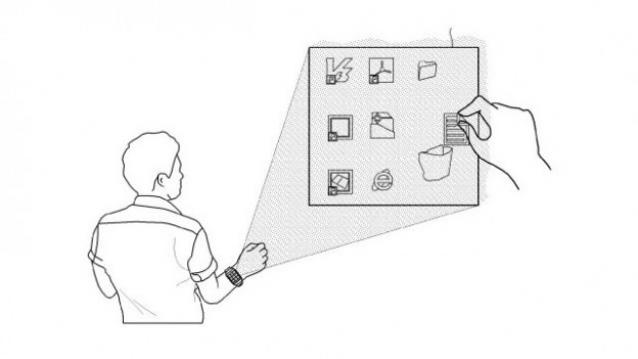 Samsung filed a patent application for wearable devices that have embedded projectors. These projectors display a UI in pre-defined spaces, and can take inputs from users based on direct interaction in those pre-defined spaces. One set of uses for a device, is a projector embedded in a smartwatch. The projector maps out the shape of the user’s hand, and projects a screen that will fit within the boundries of that hand. The projection does not just extend to the back of the hand, but can be projected downwards right along the arm, or upwards into the fingers. The same handheld smartwatch can also be used to project on wall, for a large screen UI from a smartwatch. 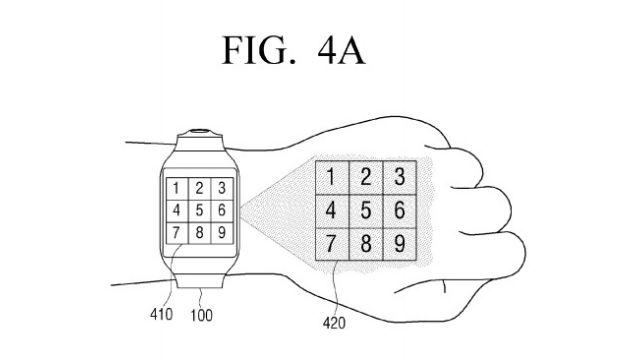 The usage scenarios range from simple interfaces, for dialing and messaging, to showing related information related to navigational searches. The projected area can also have a number pad, a keyboard, or show extended menu functions for one of the applications being used. Users can also draw or write, in the interface screen projected on the back of the hand or anywhere else.

Apart from the smartwatch, the patent also covers use of the interactive projector on a VR headset, or a headset like device. This could mean using the embedded projected as an input device in augumented reality spaces. The tracking resolution for fingers and understanding gestures is an important aspect of the patent application. The wearable devices may also include an omni directional lense, to capture images of the area being operated by the projected UI. The patent application also shows a wearable ring, and a wearable headband, and a wearable belt that could use this technology.

The patent application can be found here. There are some cool pictures.