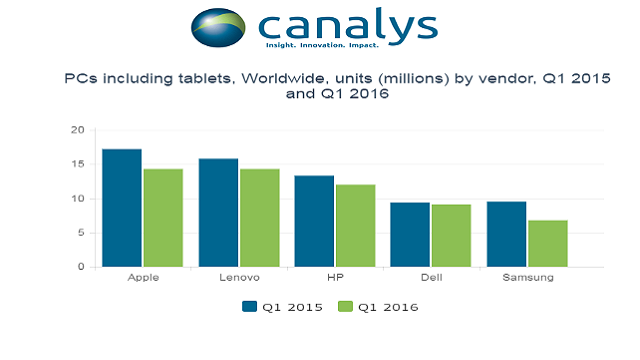 After smartphone and smartwatch, the new Canalys report talks about PC, laptop and tablet sales that fell 13 percent in Q1 2016.

The report states that PC shipments including desktops, 2-in-1s, notebooks and tablets were recorded at 101 million units during the first quarter. Not surprising, going by what we’ve seen in the past couple of years, there is a 13 percent decline compared to the same period last year. In fact, it is said to be the lowest volume since the second quarter of 2011.

Though Apple still remains the leader in overall shipments, there was a decline by 14 percent. It is ahead of Lenovo by mere 25,000 units.

“The global PC market had a bad start to 2016 and it is difficult to see any bright spots for vendors in the coming quarters. The tablet boom has faded in the distance and the market is fully mature. Global shipments declines are expected to continue unless vendors bring transformational innovation to the market. Apple and Microsoft are propping up shipments in established markets with their detachables, but price points make them less affordable in low-income countries. Although other vendors are coming to market with cheaper alternatives, they are unlikely to have a big impact on volumes in the short term. The number of people looking to buy their first PC is at an all-time low and 2016 is likely to bring yet more turmoil to global PC vendors,” commented Tim Coulling, Canalys Senior Analyst.

On the brighter side, the sales of two-in-ones grew 13 percent. However, the market still fell as notebooks were 18 percent lower than the previous year. Moreover, PC shipments in Asia Pacific and Greater China dropped 14 percent as the Chinese market saw third consecutive quarter of double-digit declines. Read the complete report here.