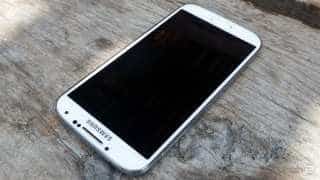 There has been a lot of speculation and rumours about Samsung’s next flagship device, the Galaxy S5. Adding to those, a new leak has surfaced, this time with images of alleged device parts, which in this case a metallic frame for the new handset. An unverified translation by SamMobile reveals that the pictures were obtained by Nowhereelse.fr from a source close to a sub-contractor that the South Korean company has allegedly chosen to produce said part.

The leak does not reveal any design aspects, though. It does however indicate that the handset will be bigger than Samsung’s current Galaxy S4. The frame, according to the image, measures 5.66-inches in height and 2.8-inches in width. When you compare the measurements with the earlier flagship, it seems possible that Samsung is looking at a 5.3-inch display for the new device.

There are some discrepancies with the image, though. The camera slot is on the side, contrary to Samsung’s tradition of placing the slot in the middle. The USB port opening also doesn’t seem big enough to support USB 3.0, earlier seen in the Galaxy Note 3 and which is expected to be seen in the S5. While the leak indicates that Samsung may be moving away from plastic frames and opting for a metal one, there are no guarantees that the leaked image even belongs to a Samsung device.

Earlier reports had claimed that the Galaxy S5 could come with an AMOLED display sporting a resolution of 2560×1440 pixels and a density of 560ppi. There is also speculation that Samsung plans to strap a 64-bit mobile processor, possibly an octa-core one. Other features expected include a 16-megapixel camera with optical image stabilisation and 4GB of RAM, topping the Note 3 which comes with 3GB of RAM. While there is no official word from Samsung, reports claim that the new handset could be unveiled early next year, possibly as soon as January. Sales for the same are expected to kick off in February.