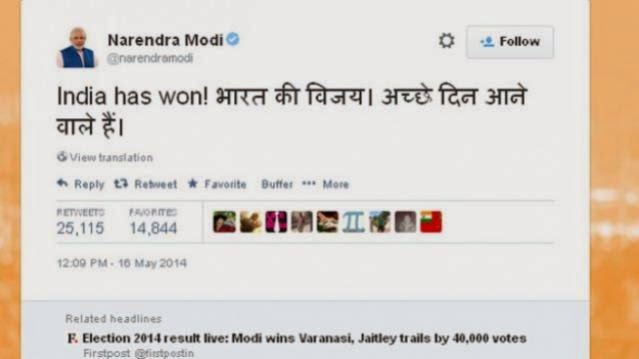 As counting winds down in constituencies across India, one thing is becoming more and more clear. The next government will be formed by the National Democratic Alliance, as trends point to a big win for the Narendra Modi-led BJP party and its allies.

And as the picture became clearer, celebrations broke out at BJP offices in the country, and it wasn’t long before Modi himself joined the victory party. His tweet proclaiming the victory of the party has become the most retweeted tweet from India in Twitter’s history. At the time of this writing, it had received over 29,000 retweets and had been favourited over 17,000 times. See the tweet below:

Twitter India’s official account tweeted to make the landmark official, though the tweet has a long, long way to go before it can hope to compete with the all-time retweet record-setters. Top of the list is of course the famous Oscar selfie, followed by US President Barack Obama’s victory tweet after his second term confirmation.

The immediate nature of Twitter conversations mean that it can be used for real-time engagement with followers. Politicians love the platform because of this reason alone, and Modi has received a host of congratulatory notes in reply to his tweet.