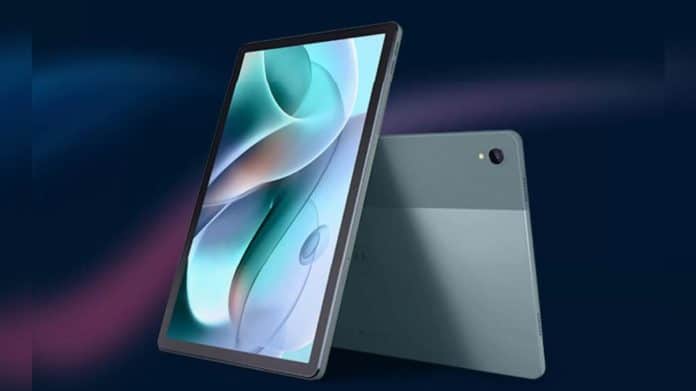 In India, the Moto Tab G70 with MediaTek Helio G90T SoC and an 11-inch 2K display has been launched.

The tablet business in India has been booming recently as more IT companies recognize the worth of introducing tablets. Motorola has released the Moto Tab G70 in India to provide users with additional possibilities. The mid-range tablet was just revealed to be launching in India, with a dedicated Flipkart homepage established up a few weeks ago. Here are all of the pertinent facts.

The Moto Tab G70 LTE arrives barely months after Motorola’s Tab G20 tablet was launched in India. Unlike the Moto Tab G20, which is aimed at the cheap market, the Tab G70 is aimed at the mid-range market, with superior features and an attractive design.

Starting with its appearance, the Tab G70 sports a sleek and attractive dual-tone design with an aluminium alloy chassis. At the rear, there is a single 13MP camera with the Motorola logo. There’s an 11-inch IPS LCD screen on the front, as well as an 8-megapixel selfie camera.

The display is one of the Moto Tab G70’s strengths, since it can output 2K content, has a peak brightness of 400 nits, and is TUV Rheinland-certified to reduce eye strain.

Under the hood, the Moto Tab G70 is powered by the MediaTek Helio G90T chipset, an octa-core CPU built on the 12nm architecture. The chipset includes a Mali-G76 GPU as well as the newer ARM Cortex-A76 efficiency cores. It has 4GB of RAM and 64GB of internal memory, which can be expanded up to 1TB through the onboard microSD card.

The Moto Tab G70 LTE has a large 7,700mAh battery with 20W Rapid Charging capability. According to the business, with normal use, the gadget may survive for 15 hours on a single charge. It will come pre-installed with a near-stock version of Android 11. It also comes with a built-in quad-speaker configuration that supports Dolby Atmos for a truly immersive viewing experience.

Aside from these features, the Moto Tab G70 offers 4G LTE, Wi-Fi 802.11 ac, Bluetooth 5.1, a hardware fingerprint sensor for biometric identification, and an IP52 water-resistant rating. The tablet also includes a dedicated Google Entertainment Space where you can access songs, movies, games, and more all in one spot.

The Moto Tab G70, which is priced at Rs 21,999 in India, is meant to compete with the Nokia T20 Tablet. It will be available for purchase only on Flipkart in a single Cyber Teal colour choice. It is presently available for pre-order and can be purchased for Rs 21,249 during Flipkart’s Big Saving Days deal, which runs till January 22. Users who utilise ICICI Bank credit and debit cards will receive a 10% immediate discount.

Check out the Moto Tab G70 on Flipkart if you’re seeking a mid-range tablet device for your work or digital education needs.