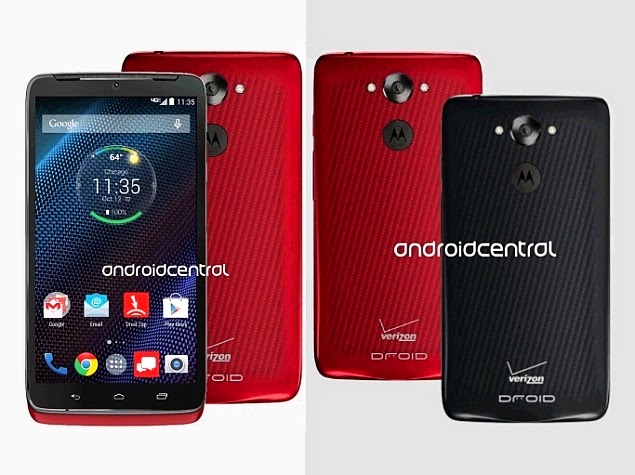 More specifications of the much-anticipated and now much-leaked Motorola Droid Turbo have made their way to the Web, and the smartphone has reportedly also been put through a benchmark test.

According to purported marketing material procured by Android Central, the Droid Turbo handset will boast of a QHD (1440×2560 pixels) resolution display, be powered by a Snapdragon 805 processor, and feature 3GB of RAM apart from 32GB of inbuilt storage. The body of Motorola Droid Turbo is also tipped to resist everyday spills and survive up to 20 minutes in a downpour.

The leak also tips other specifications that were revealed via the user manual that leaked last week, such as a 5.2-inch display, a 21-megapixel rear camera with dual-LED flash, and features like Moto Actions, Moto Display and Moto Connect.

The anticipated Motorola Droid Turbo was reportedly also benchmarked, with results visible on Geekbench 3 (via GSMArena) for a device codenamed Motorola XT1254. These results specify a quad-core Qualcomm processor clocked at 2.6GHz, apart from Android 4.4.4 KitKat. Scoring 2929 in the benchmarks, the Droid Turbo falls below the HTC One (E8) (3229) and Galaxy S5 (3011), but sits above the Galaxy Note 4 (2925) and Sony Xperia Z3 (2860).

Besides 4G LTE, the Droid Turbo was previously also tipped to feature Bluetooth, NFC, Wi-Fi and GPS connectivity options. Qi wireless charging compatibility is also mentioned as one of the features of the handset, along with support for Motorola’s Turbo Charger.

While the last week’s purported Droid Turbo user manual failed to show the back panel of the smartphone, a leak from earlier this week showed the handset featuring red-coloured textured back panel featuring a camera and two LED flash modules on either side just as expected, a design first introduced with the Moto X (Gen 2). A Motorola logo in the centre and Verizon branding at the bottom were also visible in the leaked image. A 3900mAh battery was also tipped.

A report from August claimed that Motorola is planning to debut eight new devices before Christmas. However, out of eight, the company has now already introduced Moto X (Gen 2) and Moto G (Gen 2) handsets.

The report claims that the company is also planning to launch the Droid, the Droid Maxx, the Droid Turbo, the Moto X Play, the Moto S and the much-anticipated next Nexus smartphone codenamed ‘Shamu’ before the end of the year.