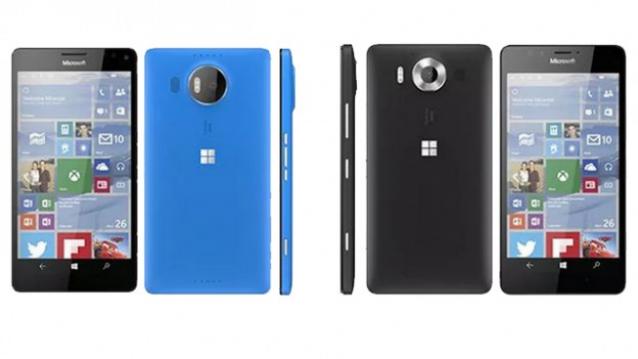 New leaked press renders of upcoming Microsoft Lumia 950, 950 XL flagship smartphones have been spotted online. Thanks to Brad Sams and serial tipster Evan Blass, we have got a good look at the new smartphones dubbed Lumia 950 (Talkman) and Lumia 950 XL (Cityman) which are rumoured to launch at an event in October.

.@bdsams I see your Cityman, and raise you a Talkman (top to bottom) pic.twitter.com/u9rACR4CeX

In terms of design, both devices sport a simple Windows logo on the back, just below the camera slot. The devices are presented in a blue and black color variant

The Lumia 950 codenamed ‘Talkman’ and the Lumia 950 XL with a codename ‘Cityman’ are premium phones. While earlier reports were pointing at an IFA launch, it is  speculated that the company may avoid it as other products at the event may outshine Microsoft’s premium devices.

The Lumia 950 or Talkman will reportedly sport a 5.2-inch display with 2560 x 1440 pixels of resolution. Under the hood, one can expect a hexa-core Snapdragon 808 processor coupled with 3GB RAM, 20-megapixel rear snapper, 5-megapixel front-facing camera, 32GB storage and a 3,000mAh battery.

The larger, 950 XL or Cityman, will come with a 5.7-inch display, and almost a similar set of specs. Apart from the larger display, some other differentiating specs will be an octa-core Snapdragon 810 processor and a 3,300mAh battery.

Both smartphones will support Qi wireless charging and also an infrared scanner that will unlock the device in seconds. Though ZTE has already introduced the iris scanner, it is still not a commonly found feature and could turn out to become a USP of the device. Both will also feature USB Type-C and come dipped in Matte white or black polycarbonate.