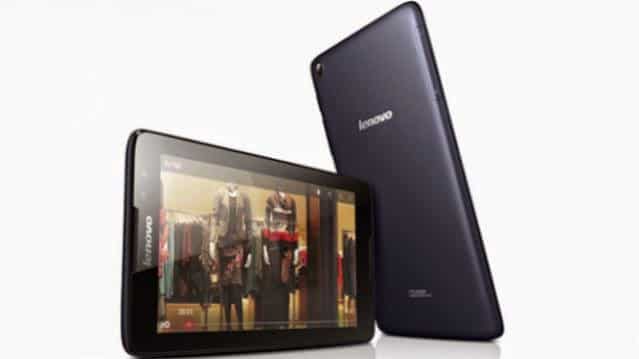 The A8 hits the sweet spot in terms of price and display size
Lenovo has unveiled its latest range of competitively priced tablets called the A series. In all five tablets were launched; A7-30, A7-40, A7-50, A8 and A10. All the launched tablets seem to be aimed at those who would like to have a portable and affordable entertainment plus computing device. The launch of this new series of tablets comes on the heels of it unveilingThinkPad X1 Carbon at CES 2014.
As stated on Android Central, Lenovo A7-50 will cost £99.99 (approximately Rs 9,929),  A8-50 will be £139.99 (roughly Rs 13,902) and A10 would cost you £169.99 (about Rs 16,881). The price for the A7-30 has not been revealed.  All four tablets come loaded with Dolby-enhanced dual speakers and will run on Android, but Lenovo has not mentioned which version of the OS it is.
The A7-30 tablet comes with a 7-inch display having 720×1280 pixel resolution and supports voice calling. It has dual front speakers with Dolby stereo enhancement. The A7-50 is a step up from its sibling. It comes with 7-inch HD wide display. It also comes with a 2MP  camera on the front plus another 2MP unit on the back. The tablet has 3G connectivity feature along with dual Dolby speakers. The A7-40 Android tablet is a variant of A7-50. It boasts 8GB of internal storage space and has a lone 2MP camera on the front.
The A80 tablet is being promoted as an entertainment tablet. The device has an 8-inch widescreen HD display that has a resolution of 720×1280 pixels. It has two cameras; at the front and back, though the press release doesn’t mention the resolution.
Lenovo A10 tablet is the most expensive of the lot and boasts a 10.1 inch HD display that has a resolution of 720×1280 pixels. Surprisingly the tablet does not have a camera; either at the front or back.
The worldwide availability of these tablets is as yet unknown and Lenovo has not even mentioned some hardware specs such as the processor and RAM and connectivity options.