We’ve been hearing a lot of rumours about the upcoming OnePlus 3 and there isn’t concrete evidence regarding the specs. To add to that rumour mill are now images that allegedly showcase the phone. The images were first spotted on Weibo and reported by PhoneArena.

The images show what looks like a physical home button which will probably double as a fingerprint sensor. This assumption is supported by the fact that there doesn’t seem to be a fingerprint sensor on the rear of the device, which only houses a camera unit and flash. The power button seems to be on the right and the volume rocker on the left. 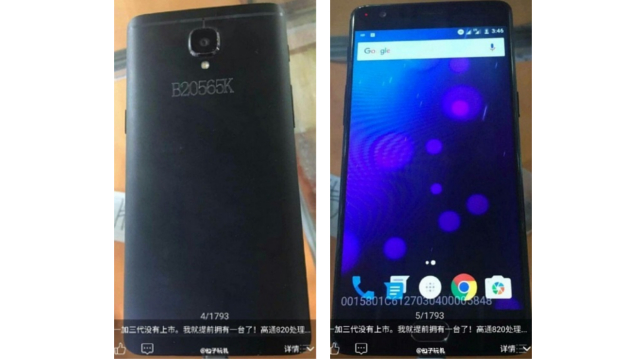 In terms of specifications, what we think we know is this. The phone will sport a 5.5-inch Super AMOLED, Full HD display (1920 x 1080), a Snapdragon 820 chipset at 2.2GHz backed by 4GB of RAM. The GPU will be an Adreno 530 and 32GB of storage will be in-built. The device might use a 3500mAh battery and incorporate a 16MP rear and 8MP front camera. The ppi for the display works out to 401, which is very nice and it should be the same as on the iPhone 6S Plus. The phone is expected to run Android 6.0.1-based OxygenOS 3.0.

On paper, the phone does sound delightful, but considering that there are so many budget flagships out there with similar specifications, only time will tell how well the phone actually does.