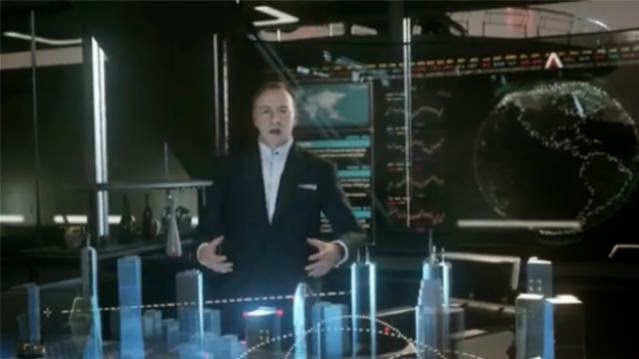 Mr Underwood, is that you?

Among the various depictions of power-hungry politicians on screen, our current favourite is the cunning and ruthless Frank Underwood, as played brilliantly by Kevin Spacey in the Netflix original show House of Cards.

Underwood is not just a shrewd politician looking to grab a piece of the throne; he’s also a bit of a videogame nut, and he does get upset when his personal security setup gets in the way of some button-mashing. On more than once occasion, we’ve seen Spacey kill virtual enemy combatants on the show.

So we were not really surprised to see a CGI Spacey appear in the new Call of Duty: Advanced Warfare trailer, spouting his vision for parts of the world which have not seen a democracy. Reports suggest he will be the main antagonist in the game, commanding a rogue army of private soliders seemingly hell bent on destroying America.

The trailer, captured on an Xbox One, shows a lot of action taking place in destroyed American cities, but we were only really captivated by Spacey’s voice, which is equal parts haunting and charming. It’s also very much like his character from House of Cards, which is what makes this somewhat of an inside joke and which is also why it works well. In the end, the trailer shows the game’s supposed tagline: ‘Power changes everything’. That also ties in to the House Of Cards narrative, making us wonder if indeed this is some clever cross-promotion. House of Cards is in no need of any more introduction though having made history as the first online-only show to win Emmy awards.

An earlier teaser on Instagram also showed Spacey. Here he’s talking about power again. “Power determines who is right. I have the power, so I’m right,” a computer generated Spacey tells the camera.