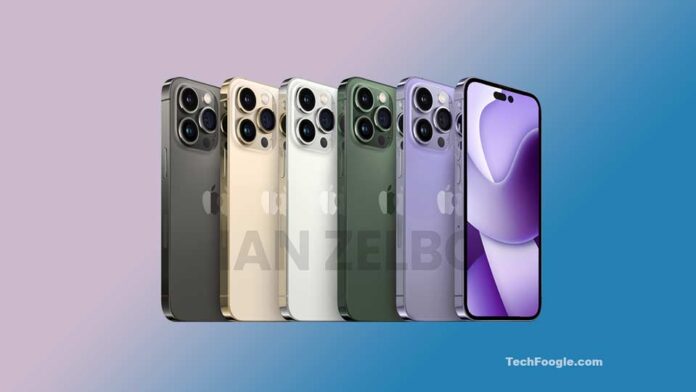 iPhone 14 lineup All Colors Leaked: Given that the iPhone 14 is set to appear next week, there are more speculations about it than ever circulating in the IT community. We just learned the charging rates for the iPhone 14 Pro models, and we now know the hues of the iPhone 14 series.

The iPhone 14 and 14 Max are expected to be available in red, white, green, purple, blue, and black. Gold, silver, green, graphite, green, and purple might be available for the iPhone 14 Pro and iPhone 14 Pro Max. The pink color has presumably been removed from non-Pro models, while the Sierra Blue color will be removed from Pro models. Despite this, all four of them will embrace the purple hue, which is also an option for the iPhone 12.

Made a quick mockup of the leaked iPhone 14 and iPhone 14 Pro color offerings! #AppleEvent pic.twitter.com/F48N3ILGlg

These color selections aren’t brand-new, but they do look beautiful, and I have a preference for the purple ones. Please tell us which one you like most.

We anticipate significant modifications to the design. The “hole+pill” design, which would replace the notch, may only be available on the iPhone 14 Pro variants. The common versions might maintain the iPhone 13-style look. It is also rumored that the photography section is improving. This could, however, only apply to the iPhone 14 Pro and 14 Pro Max. More improvements are anticipated, including 48MP rear cameras and a new ultra-wide lens with a big sensor.

Another thing to anticipate is that Apple may give the non-Pro versions the A15 chip from last year, while the Pro models would receive the A16 chipset. Bigger batteries, capability for satellite communications, significant RAM improvements, and other features might all be included in the future iPhones.

Due to the significant upgrades that the iPhone 14 series, which consists of the iPhone 14, iPhone 14 Max, iPhone 14 Pro, and iPhone 14 Pro Max, is reported to bring about, it was anticipated that it would cost more than the current iPhone 13 range. However, according to new data from TrendForce (via 9To5Mac), Apple may choose to maintain aggressive pricing owing to the falling mobile industry and mounting global inflation concerns.

Considering that the iPhone 14 models might not include many updates whereas the 14 Pro devices almost certainly will, the cost seems reasonable. The pricing of the iPhone 14 series has yet to be determined.

One thing to keep in mind is that these rumors are just that—rumors—and it would be better to wait until the launch ceremony on September 7 to learn the truth.