Apple released iOS 16.0.2 with fixes for camera shake and other issues. iOS 16.0.2 update with important bug fixes and security enhancements is now available for all compatible iPhones.

Apple has released iOS 16.0.2, which fixes many bugs encountered by iPhone 14 customers, including camera wobble, dark screen, and more. This update is available for all iPhones with iOS 16. It is known that Apple launched iOS 16 on September 12, 2022, the second largest update of the company in two weeks. Its size is 267.5 MB To install the iOS 16.0.2 update, iPhone users must navigate to Settings > General > Software Update.

iOS 16.0.2 update is now available. This is primarily intended to address camera shake issues on the iPhone 14 Pro. For those of you who don’t know, many iPhone 14 Pro and 14 Pro Max customers have reported that the camera shakes or jerks while using third-party applications such as TikTok, Instagram, and Snapchat. On the other hand, the iOS camera app works flawlessly. I think it might damage the hardware.

This problem has been brought up so many times that Apple needs to fix it. Apple has identified OIS in the firmware of iPhone 14 Pro models as the cause.

16.0.2 also fixes a copy and paste issue where permission prompts occur when copying content from one app to another. Giving the app permission to the clipboard doesn’t seem to have solved the problem. Apple is aware of the issue and says a fix will be available soon.

Black screen on configured iPhone, unable to access VoiceOver after reboot, and unresponsive touch input for iPhone X, iPhone XR, and iPhone 11 screens after service are other issues that will be fixed. 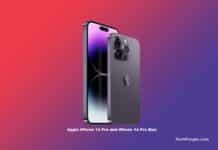