Infibeam, Flipkart and Amazon start taking pre-orders for iPhone 6 and iPhone 6 Plus 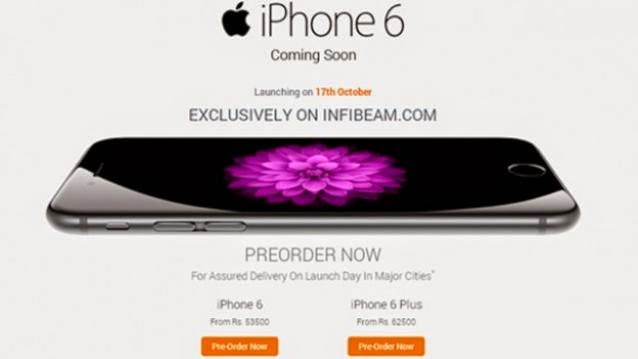 Finally, iPhone 6, iPhone 6 Plus pre-orders have begun in India. While people are known to stand in long queues to grab the new iPhone, the company has also partnered with online retailer Infibeam to sell the plush devices.

In fact, Infibeam claims to be the sole Authorised Apple online retailer in India. Contrary to this, the device is also listed on Flipkart. However, Flipkart page also has a Pre-Order Now button and it also states the estimated delivery date as October 17th. The iPhone 6 and iPhone 6 Plus have been listed on the site starting at Rs 53,500 and Rs 62,500, respectively.  The e-retailer also promises to get it delivered by October 17 in metros like Delhi, Kolkata, Ahmedabad, Chennai, Bangalore, Hyderabad, Mumbai, Gurgaon, Pune, Jaipur, Nagpur, Faridabad, Noida and Secunderabad.
Amazon has also started taking pre-orders for the Apple iPhone 6 but there was no information on the iPhone 6 Plus.

Last week, Airtel listed the iPhone 6 Plus, the larger of the two devices, on its website, putting an end to all the drama surrounding the delayed India launch for the nifty Apple devices.

It should be noted that when the iPhone 6 and iPhone 6 Plus page went live on the Apple website, it showed 26 September as the initial release date for India. The date was then changed to 17 October and after that the launch date completely disappeared and has found no mention on the page at all. Post all of this, rumours had gained traction that the India launch could be delayed until November.

Owing to the reports about a delayed launch, several iPhone 6 units had gone on sale in the grey market and selling at outrageous prices that went well over a lakh. However, as the buzz around Apple’s plan to start selling the device officially by mid-October or first week of November rekindled, there are several iPhone 6 units selling online for under Rs 60,000 on some e-commerce websites.