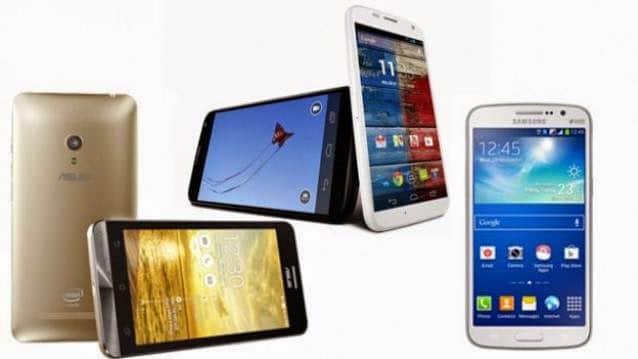 When it comes to a big market forcing a crash in the priceline, India showed its might in the smartphones arena during 2014 with companies launching a plethora of affordable devices, but it also embraced the pricey new models of iconic iPhone with equal enthusiasm.

In the new year, the Indian smartphones market is expected to further consolidate its position, before emerging as the world’s second biggest market in 2016.

“Smartphones as a category is growing at a phenomenal pace. The Rs 5,000-15,000 category is exploding and we expect this trend to continue in 2015,” Nokia India Sales (Microsoft Mobiles Oy subsidiary) Managing Director Ajey Mehta told PTI.

In 2015, there could be more “intense action” in the entry-level smartphone market as more companies launch affordable handsets, aimed at upgrading feature phone users, he added.

As per research firm eMarketer, India will exceed 200 million smartphone users, topping the US as the world’s second largest smartphone market by 2016, largely on the back of growing penetration of affordable smart mobile devices.

Hemant Joshi, a Partner at Deloitte Haskins & Sells, also said that the affordable devices may remain key going ahead.

“The focus will remain same on Rs 10,000-13,000 price range for mass market. The price of smartphones and tablets is definitely coming down. Also, there might be price drop of the LTE-enabled smartphones as India is ready for a massive LTE deployment,” he said.

According to research firm IDC, over 44 million smartphones were sold in 2013. Compared to that, handset makers have already sold over 59.3
million handsets in the January-September 2014 period.
At the beginning of the year, IDC had estimated that total smartphone sales in the country would cross 80.5 million units in 2014.

“Features and specification are something which can be matched anytime. It is the design, user interface (UI) and the market operating price at which the product can be made available, which will entice the consumer to make a choice,” IDC Senior Market Analyst Client Devices Karan Thakkar said.

BlackBerry India Managing Director Sunil Lalvani is of the view that “digital” consumers are looking to do more and scout for a better connected experience both personally as well as professionally with enhanced productivity and collaboration functionalities.

“People transitioning or experiencing the initial stages of mobility will continue to adopt feature rich, popular devices, in India this in itself is a huge opportunity with in the rural areas,” he added.

Feature phones, despite falling sales volume, continue to command a lion’s share of the handset market in India. In the July-September 2014 quarter, feature phones accounted for 68 per cent of the total handset sales in India.

The smartphone market also received a huge fillip from the huge uptake of the eCommerce platform.
After a hiatus of nearly two years, US-based Motorola made a comeback to the Indian market in February this year with the launch of its Moto G. The choice of its sales platform was interesting. It adopted a completely online sales model partnering eCommerce major Flipkart.

Since then, many other handset makers have followed that model, launching handsets exclusively through online marketplaces like Snapdeal and Amazon and later introducing the device in the offline market.

The most awaited launch was that of Xiaomi, often referred to as the ‘Apple of China’. The company adopted a flash sales model, putting few thousand devices on sale on Flipkart, which Indian consumers lapped up within seconds. “We plan to bring in more devices – smartphones, Mibands and MiTV to India in 2015. We have an exciting year ahead of us,” Xiaomi India Head Manu Jain said.

Globally, Xiaomi has managed to rank among the top five smartphone vendors, which includes behemoths like Samsung and Apple, within the short span of its existence.

“With smaller players offering customers the latest technology at better prices, we will see a potential erosion of the dominance of the bigger players in the market,” Spice Mobility Chief Executive Officer Prashant Bindal said.

“Indian customers are value conscious buyers and make intensive comparisons before making a choice on the handset brand, with key evaluation features being technical specifications, brand image, service support and price,” he added.

The brand pull of bigger players is no longer the key decision making factor for these young customers, he said. While Samsung continued to be the market leader with 24 per cent share in July-September quarter,
it has seen its share decline as other players like Micromax and Motorola gained traction. Micromax had 20 per cent share, Lava and Karbonn (8 per cent each) and Motorola (5 five per cent) in the said quarter.

To cater to the increasing number of tech enthusiasts, who are looking at doing more with their devices, a new brand from Micromax called Yu was introduced. China’s OnePlus also made its India debut to cater to this growing segment.

Unveiled for the first time globally in India, Google is planning to roll out the programme to bring an affordable smartphone to the masses across markets like Indonesia, Philippines, Pakistan, Bangladesh, Nepal and Sri Lanka in the coming months.

“With several new innovations happening on the technical front, we will see a host of new devices with evolutionary technical developments such as increased memory, faster processors, higher resolution cameras etc. This will span across various price brands thus enhancing the range of smartphones available to Indian customers,” Bindal said.

The key differentiation factor in the future for mobile handset brands will include the technology development, service support and brand reliability, he added.

A Samsung spokesperson said it expects its sales to continue to grow robustly in 2015.

Market analysts are also betting big on wearables as a category to grow fast in the coming year. While 2014 saw many handset makers like Apple, Motorola, Samsung and LG announcing new smartwatches, sports companies like Adidas also jumped on the bandwagon with their fitness bands.
“With the advent of the Internet of Things, the potential of connecting with regular items such as TV, refrigerators or washing machines which can become smart enough to talk to. The future also depends a lot on the device, as not all wearables are the same and the market trend is reflecting that health and enterprise are the two sectors seeing the most attention,” Motorola India General Manager Amit Boni said.

Industry watchers are of the view that there is still an immense potential in the Indian market that players will explore in the coming year.

“The smartphone market in India is still not mature. India has only 111 million smartphone users and the projected user base is 519 million by FY18. Hence, there is high potential in the market,” said Joshi of Deloitte Haskins & Sells.

Many brands are lined up with new features and services to attract customers like OnePlusOne, Lenovo Layered phone will give tough fight to established brands, he added.