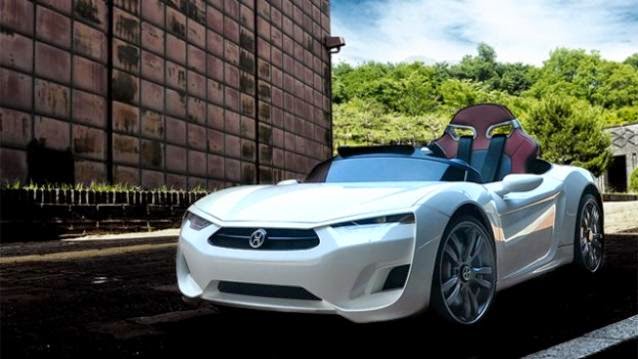 Kids can now drive a luxury sports car and parents only have to shell out US dollar 1,000 for it as a South Korean company has developed a high-performance 4-feet-long electric car Henes Broon F870 for kids.

The Henes Broon F870 is a miniature version of a luxury sports car meant for kids five and under and can touch speeds of 16 kph. The car comes with an Android tablet that doubles as a dashboard and infotainment deck.

Every aspect of Broon perfectly displays the identity of a real car. Not just a car, it is a supercar for your kids,” its manufacturer Henes said. Unlike the toy wheels used on most kids’ vehicles, Broon’s wheel structure is similar to that on an actual motor vehicle. Internally, large bearings are used on each wheel, allowing it to rotate smoothly.

In addition, a dense urethane foam tire is used, minimising vibration and noise from the road while vastly improving traction and over all performance, Henes said. The car has working headlights, brake lights, hazard lights and turn signals.

The car has a long battery life and recharging the car also recharges the 7-inch Android touchscreen tablet on the dash, ‘Wired’ reported.

It displays the car’s speed, lets parents adjust various settings, and streams music to the car’s speakers. The tablet also lets you tweak safety features, like maximum speed and its driving mode. The car is quipped with sensors that detect its electric current, voltage, direction and internal temparature.

In response to the unusual activities, Broon decides whether to activate emergency stop or shut down of the system, and give voice instruction to take appropriate actions such as rest the vehicle for some time or move the vehicle to a safer place. The car can also be controlled with a Bluetooth remote control.