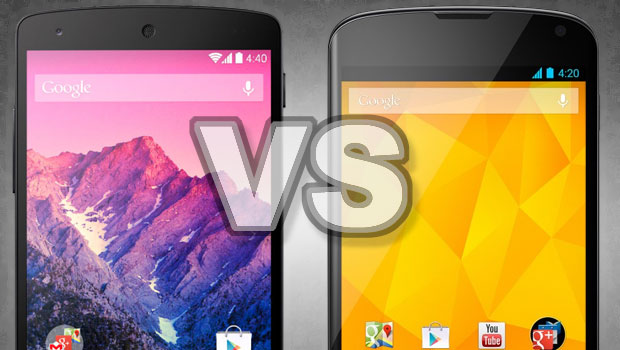 The Google Nexus 5 has been officially unveiled. It’s a 5-inch, Full HD, quad-core phone that sells for under £300. It should have the Samsung Galaxy S4 and co. worried.

But is it much better than the Nexus 4, the 2012 model in the range? Here’s what the new Nexus 5 offers over the older phone.

The Nexus 5 design is a bit more conservative

The Nexus 4 was the first LG-made Google phone, and it was out to make an impression. The front and back of the device were topped with layers of glass, and there’s a shimmery texture on the back.

It made the Nexus 4 a distinctive-looking phone, but most people agreed it didn’t feel quite as high-end as the construction materials might suggest. It feels like a plastic-bodied phone.

The eye-catching look has been dropped this time around. The Nexus 5 has a matt plastic back that’s either plain black or white, depending on the finish you go for.

…But the Nexus 5 is lighter and thinner

A simpler design is a sensible move, and from a design specs perspective, the Nexus 5 is an improvement. It’s 0.5mm thinner and 9g lighter, despite being a larger phone.

What’s more impressive than these figures, though, is how little width has been added to the phone by incorporating a larger screen. The Nexus 4 is 68.7mm wide, the Nexus 5 69.2mm. That’s just 0.5mm difference, for an extra 0.3 inches.

Phone width is one of the most important factors in determining how easy a phone is to handle – and the Nexus 5 is less wide than the Galaxy S4.

In removing all the fluff from the Nexus 4, LG has produced a superior phone design.

Its protective glass layer has been improved

Gorilla Glass 3 is – like any glass – not invincible, but is 50 per cent stronger and 40 per cent more scratch-resistant. According to its maker Corning, at any rate.

The Nexus 5 has a much larger, better screen

As its name suggests, the Nexus 5 has a 5-inch screen – significantly larger than the Nexus 4’s 4.7-inch display. There’s little downside to this expansion too, given that the Nexus 5 isn’t much larger.

Resolution has increased massively, too. The Nexus 4 has a 720p screen, the Nexus 5 a 1080p Full HD display. That’s the same resolution as the top-end phones on the market – including the Galaxy S4 and the HTC One.

Its screen is supremely sharp, with 445ppi pixel density and a high-quality, bright IPS display. Side-by-side, colours are far more vibrant without appearing oversaturated too – given the Nexus 4 already has a pretty sharp display, this is perhaps the best change in the screen tech. 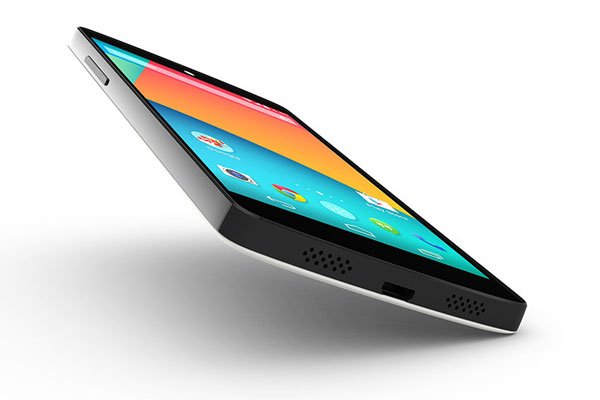 Storage is higher with the Nexus 5, but still not expandable

The bottom-end Nexus 4 is the 8GB model, which is very low storage given the memory is non-expandable. You have your internal memory, and that’s it.

Google upped the minimum storage in the phone this time around – it’s 16GB rather than 8GB. Maximum storage is also up. The Nexus 5 tops out at 32GB, where the highest-capacity Nexus was the 16GB model.

Neither has a microSD memory card slot. If you’re desperate for one, you’re better off with a Galaxy S4, which costs around £100 more SIM-free.

Processor speed is much faster in the Nexus 5

The Nexus 5 is much more powerful than the Nexus 4. It’s roughly a generation and a half ahead of that phone.

GPU power has increased too – the Nexus 5 has an Adreno 330 graphics chip, the Nexus 4 an Adreno 320. With more power on tap and a larger, sharper screen, the new Nexus is a much better gaming machine than the last.

Only the iPhone 5S and Intel-based chips are significantly more powerful than the Snapdragon 800 and – a) the iPhone chip will never come to Androids and b) Intel chips aren’t used much in Android phones and therefore suffer from limited developer support.

Both phones have 2GB of RAM.

The Nexus 5 camera is in danger of becoming a significant disappointment, but is saved by one new feature – optical image stabilisation. This compensates for movement in the person taking shots, and will result in fewer blurred images.

However, we’re yet to see if it improves low-light performance as it does in the Lumia 1020 and Lumia 925. Stabilisation can be used as a way to increase exposure times when shooting in poor lighting without making images a blurry mess.

We’ll give the cameras a full test as soon as possible.

Almost every part of the Google Nexus 5 has been upgraded from the Nexus 4 spec sheet. However, the basic idea remains the same. It’s a phone that’s aggressively priced, and makes some minor sacrifices in camera technology in order to undercut the competition from Samsung, HTC and LG. At just £100 less than a Galaxy S4 at today’s prices it’s not quite the same level of bargain as the Nexus 4. But a bargain it remains.