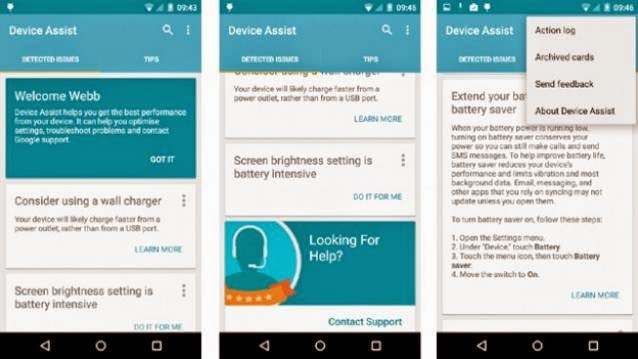 Google has launched a new app, called Device Assist, which aims to help you get the most out of your Android Lollipop device. The app is available for US-based Nexus, Google Play edition and Android One devices running Android 5.0, Lollipop.

The app claims to detect possible issues with your Android device and helps in working your way around features that don’t run properly such as the GPS, connectivity and battery. It also provides tips to help you explore new features you may not have known about and also teaches you
how to optimise the device’s performance. For example, one user commented on the Play Store, “I thought my beautiful Nexus 6 had microwave charging, like the iPhone 6. This app told me to plug my phone into a wall charger, essentially thwarting a disaster in my kitchen. Thanks Google! ”

The app explains features that first-time Android users might not know of. For example, it will tell you to use a wall charger instead of charging from a USB for faster charging. Similarly, it can tell you if the screen’s display is too high and if it’s heavy on the battery.

Nexus and Google Play edition devices can gain easy access to live Google support, which should help the less tech-friendly Android users. Though the app is available for Nexus devices only in the US, you can still download and install the Device Assist APK if you are from a different country.