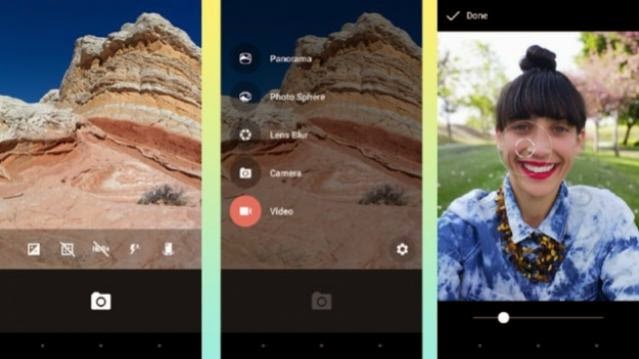 Google has finally revamped its camera app for Android and at the same time it’s also releasing it to the Play Store for easier updating in the future. Just as it did with the Keyboard and Launcher apps, this one is available for any phone running Android 4.4+ KitKat.

The first thing that most people would notice is that UI has become even more minimalist. If you didn’t like the older UI because of lack of options right on the capture screen, then this one won’t please you either. Secondly, there’s no shutter button, instead Google has given you a shutter bar, which we love, because it doesn’t require you to fiddle around for the right spot to tap.

You will also see a menu key, which shows you the available options based on the shooting mode you have chosen. In addition to Panorama mode and Photosphere, Google has added something called Lens Focus, which lets you selectively choose which spot of the picture has to be in focus. You can even adjust this after you have shot the picture, which is a handy update.

Shooting modes are hidden away in an invisible menu on the left side. They can be accessed through a swipe in from left, just like the regular Android side navigation bar.

In Lens Focus mode, Google requires you to keep the subject centred and move the camera along the vertical or horizontal axis as may be the case. You have to be very steady and slow in your movements, which is not such a hindrance because the whole process lasts about 2 seconds. After the image is processed you can choose the focus area and the intensity of the blur element. When you crank it up fully, the software adds weird artefacts to the focussed part as well, so naturally there’s some more work to be done in this area, but now that the app is on the Play Store, updates will come at a faster pace.

Google has also cranked up the stitching algorithm in the Photosphere and Panorama mode. Photospheres can now be up to 50MP in size, which is great for pixel peepers. Panorama resolution can also be adjusted between low, high and maximum with the processing time increasing as you go up from low.

There are other features buried inside the APK file of the Google Camera app, discovered by Android Police. These include burst mode, time lapse mode, wide angle mode, an advanced camera mode, video effects, and the ability to set a Photosphere as a live wallpaper.