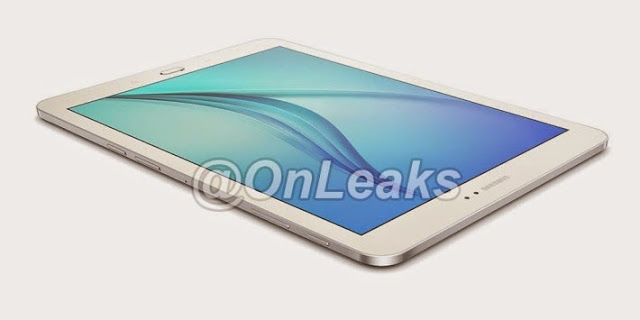 Several months ago rumors began to mention the next generation Galaxy Tab S products. In particular, the talk of the town was teaching us that Samsung would be utilizing a 4:3 aspect ratio, premium materials (a metal frame essentially) and the latest and greatest specs. As the weeks have passed, information has slowly leaked out, and now we find ourselves with what might be a first look at the finished product. Albeit it a press render.


This leaks comes to us via @onleaks, and as you can see, the tablet looks… A lot like the Galaxy Tab A series which has already been announced and released in several key markets around the world. Assuming this is the final product, it raises a somewhat odd question coming from Samsung: why does this premier premium product look like a baseline-budget one? Last year’s Galaxy Tab S series featured an exclusive design (reminiscent of the Galaxy S5) that looked night-and-day different from the Galaxy Tab 4, Galaxy Tab Pro, and Galaxy Note 10.1 2014/Pro 12.2 devices which came before it.

When last we heard, it is expected that in addition to a QHD SuperAMOLED screen, the Tab S2 series will come with an Exynos 5433 32-Bit CPU, but it may be replaced with the 7420 given the latter’s 64-bit processing — something that will come in handy with the Android 5.0.2 Lollipop build that they will be running on. Category 6 LTE will be supported on cellular models. The device will include 3GB of RAM and 32GB of on-board storage with microSD support up to 128GB. The 8-inch model will have a 3,580 mAh battery, the 9.7 inch, a 5,870 mAh unit. Both models will have an 8 megapixel rear camera and 2.1 front camera, according to the leaks.

Assuming this leak is genuine, could Samsung be standardizing its tablet offerings? Might we be missing something (like the possibility of a glass back)? Moreover, what would this mean for Samsung products released later this year? Will they look similar to the S6?